Velociraptor, or Raptor, is a genus of dromaeosaurid dinosaur in the Jurassic World Evolution series. Originating from Late Cretaceous Asia, Velociraptor fossils are first unlocked on Isla Muerta, and can then be excavated from the Iren Dabasu Formation and Nemegt Formation.

Velociraptor is used in the creation of several hybrids, the Indominus rex and the Indoraptor during the main campaign, and the Spinoraptor in the Secrets of Dr. Wu expansion pack.

Additional Velociraptor skins were added to the game with the Raptor Squad Skin Collection, which included four skins from Jurassic World, while Return to Jurassic Park introduced several skins and updated models based on the Jurassic Park trilogy.

Velociraptor was among the first species of dinosaur successfully cloned by InGen, intending to be displayed as an attraction in Jurassic Park on Isla Nublar. In 1993, three raptors were known to have been enclosed on Isla Nublar before they were killed through various means during the 1993 incident.[1] According to a 1996 InGen report, at least one of these Velociraptors successfully changed sex and began breeding.[2]

Numerous other Velociraptors were known to have been present on Isla Sorna in 1993 where they also began breeding, establishing nesting grounds in the island's interior.[3] During the 1997 incident, a pack of the Velociraptors on Isla Sorna killed members of an InGen team on the island.[3] In 2001, those involved with the Isla Sorna rescue mission encountered numerous raptors.[4]

In 2012, InGen began the Integrated Behavioral Raptor Intelligence Study, or IBRIS Project, to measure the intelligence of Velociraptors for potential military applications. Spearheaded by Owen Grady, by 2015, the IBRIS Project actively studied a pack of four Velociraptors—Charlie, Delta, Echo, and the pack leader, Blue.[5][6] During the 2015 Jurassic World incident and resulting Indominus rex rampage, Charlie, Delta, and Echo were killed. As a result, Blue became the world's last living Velociraptor while also being abandoned to her own devices on the island.[6]

In 2018, with the eruption of Mt. Sibo on Isla Nublar imminent, Blue was among the dinosaurs rescued and taken to the Lockwood Manor in California, USA. Despite plans to involve Blue in the training of the Indoraptor, she killed it, and later escaped into the wild.[7]

Velociraptor is among the larger dromeosaurids in the game, with features similar to its relatives such a Deinonychus, notably the large sickle claw on its foot. The base cosmetic gene of the Velociraptor is green with various other shades of green creating spots and stripes along its body.

As Velociraptor is unlocked on Isla Muerta, it is the first carnivore players are likely to create with both a social rating of 2 and a high comfort threshold, making it considerably more difficult to contain than other early campaign carnivores. The numerous storms players will encounter on Isla Muerta are likely to cause the dinosaur's comfort rating to decrease to the point where it will attempt to escape. Players are recommended to research more advanced fence types to mitigate this.

Velociraptors will engage in death duels with all other small carnivores such as Dilophosaurus and Proceratosaurus, as well as pachycephalosaurids such as Stygimoloch, when encountered. They will engage in territorial fights with other Velociraptors in packs of 6 or in death duels in packs greater than 6. It will also engage in predation against all ornithopod dinosaurs such as Dryosaurus and Tsintaosaurus. They are, however, vulnerable to attacks by Tyrannosaurus.

Velociraptors must be enclosed with at least one more of their own species or they will eventually attempt to break their containment. Their population limit is high, allowing them to be housed relatively peacefully alongside dinosaurs such as Triceratops. Velociraptors will socialize with members of their own species, the most highly rated of which will become the Alpha of the pack.

In Evolution 2, Velociraptors display a wider range of dynamic behaviours, including pack hunting and socialising with other raptors. A sociable species, Velociraptors live in packs of many individuals, which allow them to hunt far larger species, such as Sinoceratops.[8] Velociraptor prefer enclosures with some forested areas, and if their needs are not met, may attempt to escape by climbing above their perimeter fences.

File:Velociraptor 1997 A skin from Evolution 2.png

File:Velociraptor 1997 B skin from Evolution 2.png

File:Velociraptor 2001 A skin from Evolution 2.png

File:Velociraptor 2001 B skin from Evolution 2.png

Velociraptor lived around 75-71 million years ago in Mongolia, the first specimen of which was discovered in 1923 by Peter Kaisen in the Gobi Desert, Mongolia. It is now known from over a dozen fossils, the most famous of which is one locked in combat with a Protoceratops. The general scientific consensus is that Velociraptor had feathers, as fossils of some of the specimens' forearms show bumps that appear to be quill knobs.

Velociraptor was one of the smaller members of its family, reaching lengths of roughly two meters long and weighing 15 kilograms on average. This is significantly smaller than its portrayal in the Jurassic Park canon.

The environment Velociraptor lived in is believed to have been arid, with sand dunes, shrubbery, and small streams covering the landscape. Velociraptor coexisted with a wide variety of dinosaurs, such the ceratopsians Protoceratops and Udanoceratops, the theropod Oviraptor, the hadrosaurid Barsboldia, the ankylosaurid Pinacosaurus, the ornithomimid Aepyornithomimus, and potentially the tyrannosaurid Tarbosaurus.

The Velociraptor was created using the 3D model that was created for the Jurassic World films by Industrial Light & Magic, as well as audio files provided by Universal Pictures to create the most authentic representation of the dinosaur.[9] It was first revealed in the in-game footage that was revealed at Frontier Expo.[10][11] It received a Species Profile on March 23, 2018.[12]

In November of 2019, Raptor Squad Skin Collection DLC was released that introduced four new cosmetic skins that are based on the Jurassic World raptor pack seen in the 2015 film. Film assets were used in order to create the skins. As for the Return to Jurassic Park expansion pack, Velociraptor was given a complete overhaul with two brand new models that are based on its various depictions in the Jurassic Park trilogy, and five additional cosmetic skins. 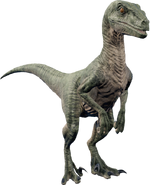 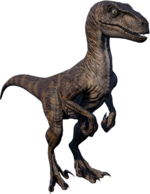 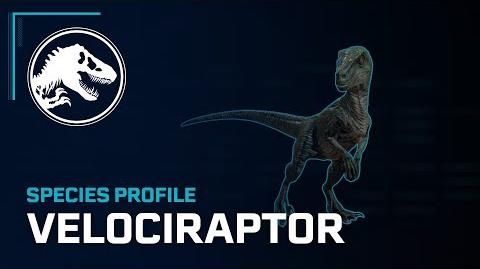 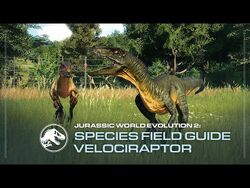 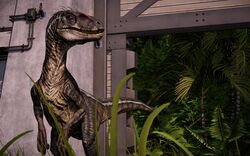