Tsintaosaurus is a genus of hadrosaurid dinosaur that originated from Late Cretaceous Asia. Found in the Yuliangze Formation of China, the Tsintaosaurus can be excavated by teams sent from Isla Tacaño, and possess similar comfort threshold as other species of hadrosaurs.

Tsintaosaurus is a herding animal that needs to be kept in groups of four or more to be comfortable. It is tolerant of other herbivores, tolerating up to twenty two other dinosaurs of various species—a similar requirement to other hadrosaurs such as Corythosaurus and Parasaurolophus. With the Claire's Sanctuary expansion pack, Tsintaosaurus show a paleobotany preference for Palms, as well as a secondary preference for Conifers, Rotten Wood and Ginkgo.

Tsintaosaurus was first discovered in the 1950s, in Shangdon province of eastern China. The first fossils found were parts of the skull and body from two specimens, as well as a multitude of isolated pieces of others, evidence that this species lived in herds. The most striking feature of the skull was a long piece of bone sticking upwards like a unicorn or narwhal horn.

At first this was dismissed as a piece of bone that had been broken, but with further study, it was revealed Tsintaosaurus was related to the lambeosaurine branch of hadrosaurs, which included Corythosaurus and Parasaurolophus, and were characterised by strange crests.

From then until 2013, Tsintaosaurus was given a long horn like crest and occasionally a billowing flap of skin connected to it, acting as a display. However later finds of Tsintaosaurus skulls, and studies other similar hadrosaurs such as Olorotitan in Russia, it was discovered that the 'unicorn horn' was in fact part of a hatchet shaped crest that allows this species to amplify its vocalisation. Tsintaosaurus also shares similar features of other hadrosaurs such as a toothless beak and batteries of grinding teeth at the back of its jaws.

Other dinosaurs that lived alongside Tsintaosaurus include the massive hadrosaur Shantungosaurus, Sinoceratops and other ceratopsians, titanosaurs and the carnivore Zhuchengtyrannus, a species closely related to Tyrannosaurus. 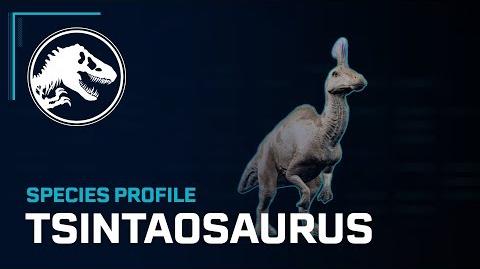 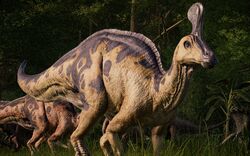