Troodon is a genus of theropod dinosaur that originated from Late Cretaceous North America. A small but highly intelligent carnivore and among the first dinosaurs discovered in North America, Troodon possesses a deadly venomous bite, which it uses to subdue its prey. Troodon is included in the Secrets of Dr. Wu DLC and becomes available to the Hammond Foundation during the Security Division mission on Muerta East.

Troodon was recreated for the original Jurassic Park, but was called to be terminated and scratched off of InGen's list for unknown reasons. An unknown employee hid the animals in a secret quarantine pen before they were released by Dennis Nedry when he turned off the power to the wild of Isla Nublar. By 1994 they either died in the wild or were killed off by the 1994 cleanup team. The embryos were subsequently destroyed, causing the regrowth of the animals to be impossible.[1]

End of information based on Jurassic Park: The Game.

A Troodon named Jeannie was created sometime during Jurassic World's operation, as Dr. Kate Walker was working with her with a device known as the Dino Decoder, a device used to understand and predict dinosaur thoughts and emotions. After the Jurassic World Incident, she was set free on Isla Nublar with her new hatchlings.

End of information based on Jurassic World Live Tour.

One of the smallest and among the most intelligent dinosaurs available to the Hammond Foundation, Troodon can be distinguished by their large eyes, small stature and venomous bite, which allows them to slowly subdue animals many times their own size.

Without genetic modifications, Troodon are highly social animals and, as such, are comfortable in groups of between four and sixteen other Troodon. Similarly, they can tolerate large numbers of other dinosaurs in the same enclosure, preying on ornithopods, ornithomimids, and pachycephalosaurids, while avoiding large carnivores, armored herbivores, and sauropods. They will, however, fight back against small carnivores like Velociraptor and Dilophosaurus if attacked. Troodon also possess a venomous bite, much like a snake.

Troodon is a dubious genus from the Two Medicine Formation. T. formosus was once considered one of the most prolific species in North America, but in the recent years, most of its fossils were moved to the genera Stenonychosaurus, Latenivenatrix, and some teeth from Hell Creek were given to Pectinodon, leaving only the type specimen, a tooth, to the genera. This leaves no diagnostic traits that can differentiate Troodon from its relatives, although a handful of large undescribed specimens from Alaska could potentially be assigned to its genus in the future. The in-game Troodon most closely resembles the wolf-sized Stenonychosaurus. Interestingly enough due to the rules of Taxonomy, the group name for these two genera is still called Troodontidae.

The Troodontidae family is a sister group to the Dromaeosauridae. The family relation can be seen in the genus sporting a similar raised, sickle-shaped claw on the foot. This claw was likely used to aid in climbing as well as in pinning down prey underfoot while killing or eating, as early Mesozoic birds and modern birds of prey have similar claws. The serrations of its teeth are similar to those of herbivorous reptiles like iguanas, leading to frequent suggestions that it was an omnivore. The wear patterns on the teeth show that it preferred soft foods.

Troodon is believed to be among the most intelligent dinosaurs. This is based off the family having some of the largest brains for their body size across Dinosauria. While other factors beyond brain-to-body size ratio do exist when accounting for intelligence, it is still reasonable to assume Troodontids were among the smartest animals on the planet in their time. Some paleontologists speculate that Troodon was as smart as a modern-day fox.

Troodon was covered in feathers like all members of its family. In life, one could have favorably compared its appearance to a toothed bird with a long tail.

Troodon lived around 76 million years ago in the Two Medicine Formation. It likely favored cooler climates, as most specimens have been found in northern and even Arctic areas. It lived alongside of rich myriad of dinosaurs such as the hadrosaurs Edmontosaurus and Maiasaura, the armoured Zuul and Edmontonia, the ceratopsians Centrosaurus and Pachyrhinosaurus, as well as the ferocious tyrannosaurid Gorgosaurus, Albertosaurus, and Daspletosaurus.

Troodon previously appeared in 2011's semi-film-canon Jurassic Park: The Game, and while it differed in appearance to Jurassic World: Evolution's Troodon, it also possessed a venomous bite. 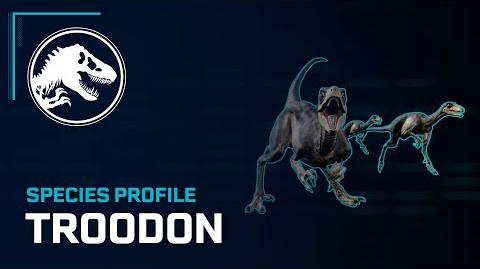