Triceratops is a genus of ceratopsid dinosaur in the Jurassic World Evolution series, originating from Late Cretaceous North America.

In Evolution, Triceratops fossils are first unlocked on Isla Matanceros at the beginning of the main campaign, and are then excavated from the Hell Creek Formation and Lance Formation. In Secrets of Dr. Wu, the Triceratops can be fused with the Stegosaurus to create the Stegoceratops hybrid.

During the creation of the original Jurassic Park on Isla Nublar, InGen bred a herd of three Triceratops on the island, one of which died of malnutrition during the incident in 1993.[1] According to a 1993 report, InGen bred a herd of ten individuals on Isla Sorna. Though by the time of the mission to Sorna in 1997,[2] the population count of the species was unknown.[3]

In 1997, Masrani Global purchased InGen and began construction of Jurassic World, which opened to the public in 2004.[4] The herds of Triceratops exhibited in Jurassic World were similar to those originally bred by InGen for Jurassic Park. Three years after the 2015 Isla Nublar Incident, numerous Triceratops roamed free on Isla Nublar.[5]

Following a mission to rescue the dinosaurs from the eruption of Mt. Sibo, several Triceratops were successfully transported to the mainland where they would later be released from captivity into the wilds of northern California.[5]

Among the largest of the ceratopsian family, Triceratops is one of the most famous dinosaurs in the world, originating in Late Cretaceous North America. The most distinctive feature of the Triceratops are its neck frill and the three horns which gave the animal its name. Similar in size to its relatives Pentaceratops and Torosaurus, Triceratops measures over nine metres long.[6]

Due to being one of the first dinosaurs unlocked in the main campaign of Evolution, Triceratops is among the first dinosaurs released by the player. Due to its low overall requirements and cost, housing these among other herbivores is effective to increasing dinosaur rating. Triceratops lacks the additional trait gene modification slots that other ceratopsians have, meaning it can't be modified to have as high a rating or stats as others in its family.

Triceratops is one of the first available dinosaurs capable of engaging in a death duel. Its low base stats mean that it is highly susceptible to carnivores such as Ceratosaurus, although its moderate social and high population limits will allow it to find safety among a herd.

Triceratops will be content around all other herbivorous species or as a solitary individual. Additionally, Triceratops is also capable of living somewhat peacefully alongside small carnivores such as Troodon and Velociraptor, only occasionally engaging in non-fatal territorial fights.

Triceratops will socialize with others of its own species on occasion, but it otherwise behaves very similarly to other ceratopsians.

In Evolution 2, Triceratops is an adaptable animal, well suited to both a solitary or social existence. Nevertheless, they are highly territorial and do not tolerate other dinosaurs sharing their food source, though will cohabitate and defend their territory alongside certain species of ankylosaurid.[6]

Within a social group, Triceratops are led by a single herd leader, who will lead the defence of the herd against predators or other species which infringe on their territory. Due to their size, Triceratops are rarely attacked by small carnivores, and will stand their ground against larger predators.[6]

Discovered in 1889, Triceratops is thus far the largest ceratopsian discovered and among the world's most famous dinosaurs. A member of the Chasmosaurinae branch of ceratopsians, there are two known species in the Triceratops genus: Triceratops prorsus and the holotype Triceratops horridus. Recently, there has been speculation that Torosaurus, a rarer ceratopsian that coexisted with Triceratops, may have been a more mature form of Triceratops, however, this is still under debate. A second species named Nedoceratops, known from only fragmentary remains, is also theorized to be an immature Triceratops.

In real life, Triceratops had a stout, muscular build with longer legs and a shorter tail than what is seen in Jurassic World Evolution. Similar to the in-game Torosaurus, the animal had rows of scutes and bumps along its back. Evidence from more primitive ceratopsians suggests that these may have been anchor points for long quills similar to those found in fossil impressions of Psittacosaurus.

Triceratops was one of the most common herbivores in Late Cretaceous North America and lived alongside species such as Edmontosaurus, Ankylosaurus, Pachycephalosaurus, Denversaurus, Leptoceratops, Thescelosaurus, and others. The apex predator of its environment, it’s arch-nemesis and equally famous Tyrannosaurus, was known to hunt and battle Triceratops. In terms of its environment, it lived in a range of ecologies, including subtropical inland and coastal regions, and semi-arid plains.

The Triceratops was created using the 3D model that was created for the Jurassic World films by Industrial Light & Magic, as well as audio files provided by Universal Pictures to create the most authentic representation of the dinosaur.[7] It was first revealed in the announcement trailer that was released at Gamescom 2017.[8] It was the first dinosaur to receive a Species Profile.[9]

For the Return to Jurassic Park expansion pack, Triceratops was given a complete overhaul with a brand new model that is based on its depiction in 1993's Jurassic Park, and six additional cosmetic skins. 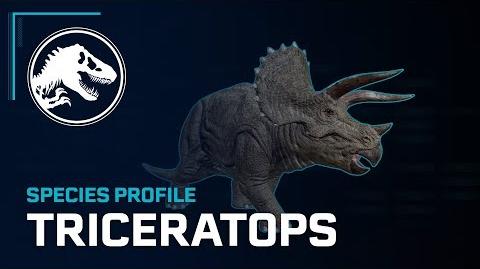 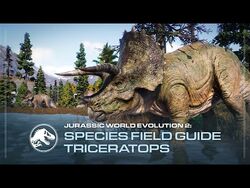