Stygimoloch is a genus of pachycephalosaurid dinosaur that originated from Late Cretaceous North America. The second-largest pachycephalosaur of the Hammond Foundation, Stygimoloch was cloned by InGen for exhibition at Jurassic World on Isla Nublar. Stygimoloch specimens were encountered on the island during the destructive volcanic eruption of Mount Sibo in 2018.[1]

Stygimoloch is rewarded for progressing through the Entertainment Division on Isla Tacaño, and upon being researched, can subsequently be excavated at the Hell Creek and Lance Formations in North America.

The Stygimoloch was first added to the game with the Fallen Kingdom Dinosaur Update.

Originally from the Late Cretaceous period of North America, Stygimoloch was cloned by InGen for Jurassic World on Isla Nublar, where it lived alongside its close relative Pachycephalosaurus. After the disastrous incident that took place in 2015, Stygimoloch and the park's other resident dinosaurs were released to the wild and were considered an endangered species at the time of the eruption of Mount Sibo.[1]

At least five Stygimoloch were successfully transported by a team of mercenaries hired by Eli Mills to the Lockwood Estate in northern California, where the surviving dinosaurs were intended to be auctioned off. However, Claire Dearing and Owen Grady released an individual named "Stiggy" from its cage, and it subsequently went on a rampage throughout the manor, disrupting the auction and causing numerous injuries before fleeing into the surrounding forest. The other Stygimoloch were eventually freed by Maisie Lockwood alongside all the other dinosaurs.[1]

Four years after the incident in Lockwood Manor, several Stygimoloch roamed the wilderness freely, with one being captured and displayed at the illegal Amber Clave Market of Valletta, Malta.[2]

Stygimoloch is a small bipedal herbivore with a large domed head. It has a prominant crown of horns around its dome and snout. The base genome of the Stygimoloch is a chestnut brown body with cream underbelly and dark brown streaks on its back.

Stygimoloch is one of the more social pachycephalosaurs, second only to Homalocephale, and can live in medium-sized to large groups of up to twelve members of their own kind, and up to fourteen dinosaurs of various species. While fairly easy to contain, Stygimoloch will become stressed when placed in an enclosure with less than four other Stygimoloch. While they are defenceless against larger carnivores, they will stand their ground and fight against small predators such as Velociraptor and Troodon.

With the Claire's Sanctuary expansion pack, Stygimoloch will have a paleobotany preference for Horsetails, and secondary preferences for Grasses and Cycads. However, they will be harmed if they eat Tree Ferns, Conifers and Ginkgo.

The name Stygimoloch means 'Demon of the River Styx', in reference to the Hell Creek formation where it was found and its ring of horns around its bony dome, giving it a devilish look.

Stygimoloch lived alongside many other Late Cretaceous dinosaurs, including the hadrosaur Edmontosaurus, the ceratopsians Triceratops and Torosaurus, the armored Ankylosaurus, the ornithomimid Struthiomimus, as well as the theropods Troodon and Tyrannosaurus.

The Stygimoloch was created using the 3D model that was created for 2018's Jurassic World: Fallen Kingdom by Industrial Light & Magic, as well as audio files provided by Universal Pictures to create the most authentic representation of the dinosaur.[3]

With Update 1.8, Stygimoloch, along with Pachycephalosaurus and Dracorex, were given the ability to fight and kill small carnivores. 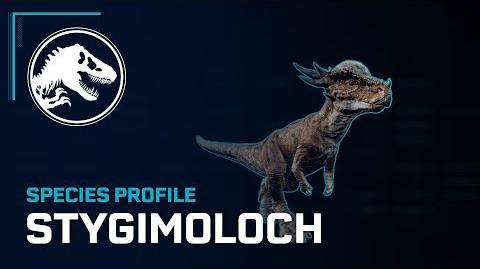