Struthiomimus is a genus of ornithomimid dinosaur that originated from Late Cretaceous North America. Particularly in comparison to other dinosaurs, their needs are undemanding, though they have a low rating among guests, second only to the Dryosaurus. In Jurassic World Evolution, Struthiomimus is the first dinosaur unlocked on Isla Matanceros.

The Struthiomimus has a brown body, a white neck and underbelly, as well as white arms. It has dark brown stripes all over its body. It also has a faint blue on the top of the head just behind the eye.

Struthiomimus is a gregarious herbivore that is able to be kept in relatively huge herds with a high population, though they do not lose comfort when kept alone. They are defenceless against most carnivores, and rely on speed to escape their predator. They can coexist with larger herbivores, such as Edmontosaurus and Triceratops.

Struthiomimus was one of the most common dinosaurs in North America during the Late Cretaceous period. Its fossils have been found throughout Alberta and Montana. Like all members of the Ornithomimid family, it was toothless, leading to speculation on the true diet of Ornithomimids. The general consensus is that they were omnivores, though some physical evidence, such as gastrolith stones, suggests that the North American species were mainly herbivores. Struthiomimus lived alongside the similar Ornithomimus. The two animals had differently shaped hands, and Ornithomimus had shorter legs. This suggests that Struthiomimus and Ornithomimus occupied different biological niches and had non-competing lifstyles. The exact behavioral differences between them is still unknown.

Struthiomimus lived alongside of many other Late Cretaceous dinosaurs, including the hadrosaur Edmontosaurus, the pachycephalosaurs Pachycephalosaurus, Stygimoloch, and Dracorex, the ceratopsians Triceratops and Torosaurus, the armored Ankylosaurus, as well as the theropods Troodon and Tyrannosaurus. 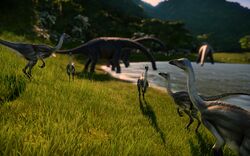