Stegosaurus is a genus of stegosaurid dinosaur in the Jurassic World Evolution series, originating from Late Jurassic North America and Europe.

In Evolution, three large herds of Stegosaurus are encountered during the opening stages of operations on Isla Sorna, and they subsequently become available for expedition teams on that island. In the Secrets of Dr. Wu DLC, they can be fused with a Triceratops to create the Stegoceratops hybrid.

Originating in the Late Jurassic period of North America, Stegosaurus was first cloned by InGen in the early 1990s, and were planned to be exhibited in the original Jurassic Park on Isla Nublar. However, although InGen maintained a herd of eleven Stegosaurus on Isla Sorna, by the time of the Jurassic Park incident in 1993, they had yet to transport any to Nublar.[1]

Stegosaurus were later exhibited on Isla Nublar for Masrani Global's Jurassic World theme park, where they lived alongside many other species of herbivores in the Gyrosphere Valley, Cretaceous Cruise, and the Gentle Giants Petting Zoo attractions.[4] Three years after the park was abandoned, numerous Stegosaurus were encountered on Isla Nublar, during a mission to rescue the dinosaurs from the volcanic eruption of Mount Sibo. Several Stegosaurus were successfully transported to the mainland, with at least one was sold off-screen during the auction, while the others were released into the wild of northern California alongside all the other dinosaurs.[5]

A year after the events at Lockwood Manor, a Stegosaurus was seen crossing a highway, and unintentionally forced a motorist off the road.[6]

Stegosaurus is a large species of stegosaurid dinosaur, in fact the largest member of the stegosaurs. The base genome of Stegosaurus is light brown, with striped plates and tail spikes.

Stegosaurus is a herding animal but becomes territorial with each other when there are more than nine individuals, a problem encountered on the Isla Sorna map when there are several loose on the island. It is advised therefore to house them in other exhibits or sell any excess Stegosaurus. Stegosaurus can also be kept with a number of other herbivores.

In Evolution 2, Stegosaurus are a social animal that live in moderately sized herds of their own species, as well as other herbivores.[7] While they are a social species, they do not coexist well with ceratopids, such as Triceratops, and will engage in territorial fights if housed in the same enclosure. Due to their natural defences, Stegosaurus can fight back against large predators, and are too heavily armoured for many smaller species of carnivore to hunt.[7] Stegosaurus require a large amount of low-lying foliage, as well as some forested areas in their enclosure, and may attempt to escape if their social and environmental needs are not met.[7]

One of the world's best-known dinosaurs, Stegosaurus was first found in 1877 by the famous paleontologist, Othniel Charles Marsh in the Morrison Formation. Famous for the large plates on its back and the lethal spikes on its tail, the name Stegosaurus means 'Roof Lizard', as Marsh first theorized that the plates lay across the dinosaur's back as a sort of armor. It was only after several complete skeletons were found that the plates were correctly reconstructed. The plates of Stegosaurus and other North American stegosaurs such as Hesperosaurus are arranged in staggered alternating pairs, which are different than the stegosaurs with straight pairs of plates such as Kentrosaurus and Chungkingosaurus.

The plates have long been a point of discussion. Being too fragile for defense, they were more likely used for display or make the animal appear larger and more frightening to predators. In addition to the 17 to 22 plates on its back, Stegosaurus also had four "thagomizers" (named in honor of a 1982 The Far Side comic) on the end of its tail, which would've been used as a potent weapon against predators like Allosaurus and Ceratosaurus, as demonstrated by an Allosaurus vertebra described with a large hole perfectly fitting the shape of a Stegosaurus thagomizer. Some Stegosaurus skeletons had six to eight spikes instead, possibly as a birth defect or by genetic chance or a combination of both.

Some scientists believe that the back legs of Stegosaurus were designed for rearing up to reach the tops of trees. Trackways show that the animal likely traveled in multi-age herds for protection.

Stegosaurus lived in what is now North America and Portugal during the Late Jurassic period in semiarid environments with distinct wet and dry seasons. It coexisted with other notable dinosaurs such as Allosaurus, Apatosaurus, Brachiosaurus, Camarasaurus, Ceratosaurus, Diplodocus, and Dryosaurus.

The Stegosaurus was created using the 3D model that was created for the Jurassic World films by Industrial Light & Magic, as well as audio files provided by Universal Pictures to create the most authentic representation of the dinosaur.[8] It was first revealed in the announcement trailer that was released at Gamescom 2017.[9] It received a Species Profile on February 9, 2018.[10]

During the trailers leading up to release, Stegosaurus was seen with a low-hanging tail similar to old-fashioned portraits, as well as Jurassic World.[11][12] In response to community feedback, the development team revisited the model prior to release and included an elevated tail, similar to both its real-life counterpart and its appearance in the earlier Jurassic Park films.

In 2019, from January 24th to January 31st, a community event was held where the community was required to cumulatively release 25,000 individual Stegosaurus.[13] This goal was exceeded by ten-fold, as the total came out to 295,514. As a result, a new vivid skin could now be applied to Stegosaurus for all players following Update 1.6.2.[14]

For the Return to Jurassic Park expansion pack, Stegosaurus was given a complete overhaul with a brand new model that is based on its depiction in 1997's The Lost World: Jurassic Park, and six additional cosmetic skins. 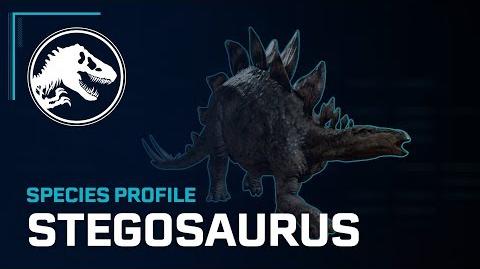 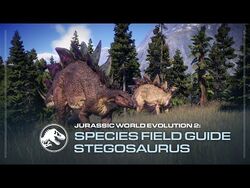 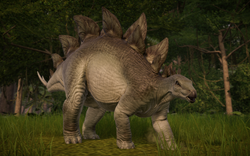 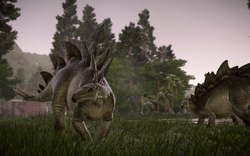