Jurassic World Evolution Wiki
Register
Don't have an account?
Sign In
Advertisement
in: Dinosaurs in Evolution, Hybrids, Herbivores,
and 3 more

Stegoceratops is a genetically modified species of dinosaur, created by Dr. Henry Wu by combining the base genome of Stegosaurus with that of Triceratops.

While it isn't known to have ever been created by InGen, this hybrid did appear in a computer screen in Henry Wu's laboratory alongside the Indominus rex and two other unidentified hybrids: One that resembles a pachycephalosaur and another that resembles a therizinosaur.[1]

A result of Dr. Henry Wu's genetic experiments using hybridization, Stegoceratops is unlike any other animal on Muertes Archipelago. It has the modified head of a Triceratops with multiple, abnormally large horns, and the body of Stegosaurus with plates covering its entire body in various sizes.

The base genome of the Stegoceratops is dark grey with creamy underbelly. And the plates on its back are reddish orange with dark brown stripes.

Like the Stegosaurus and unlike the Triceratops, Stegoceratops likes to live in herds. Unless modified, they require at least three herdmates to be content. Keep this in mind before establishing a paddock for them. They prefer a mostly grassland covered paddock with some trees. In terms of species to share the paddock, Stegoceratops can get along fine with any other herbivore who is also social.

Small carnivores such as Deinonychus can also coexist with it fine as while they might briefly face off, the small carnivores won't dare attack and will back off. That said however, larger carnivores are completely incompatible. Stegoceratops is deceptively strong despite its stats and can kill large theropods in a confrontation.

While fighting against other carnivores, Stegoceratops uses its tail to attack its opponent before using its horn to deliver the killing animation, making it the only dinosaur in Jurassic World Evolution with this behavior. 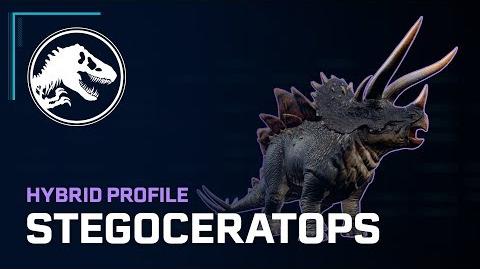 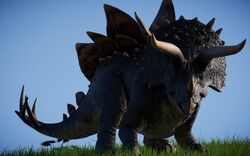