Spinosaurus is a genus of spinosaurid dinosaur in the Jurassic World Evolution series. Originating in Late Cretaceous Africa, Spinosaurus is one of the largest species of theropod dinosaurs.

In Evolution, Spinosaurus is first encountered during Campaign Mode as a wild animal on Isla Sorna. Spinosaurus fossils can then be excavated from the Bahariya Formation and Chenini Formation. In the Secrets of Dr. Wu expansion pack, Spinosaurus can be fused with Velociraptor to create the Spinoraptor hybrid.

After the San Diego Incident in 1997,[1] which brought the existence of dinosaurs on Isla Sorna to public knowledge, the failing InGen, which had all but collapsed in the wake of the disaster, was purchased by Masrani Global.[2] Only one hundred days after the deal was finalized, and in violation of the Gene Guard Act, which banned access to Isla Sorna and the cloning of prehistoric species, an InGen team incubated several new species of dinosaur, including Ankylosaurus, Ceratosaurus, Corythosaurus, and most notably, Spinosaurus.[2] Bred covertly in 1999 under "Amalgam Testing", the Spinosaurus was experimented on over a period of nine months before being abandoned on the island.[2][3]

In 2001, the only Spinosaurus known to have been cloned by InGen was encountered on numerous occasions by the survivors of a plane crash on Isla Sorna and was responsible for the deaths of numerous individuals, as well as a Tyrannosaurus which had entered its territory.[4] Reports of the Spinosaurus was later reported to the authorities by the survivors, but it was covered up by "bribed officials" and went undisclosed until 2015.[2]

The introduction of the Spinosaurus, and to a lesser extent the other illegal species, had a profound impact on the ecosystem of Isla Sorna, resulting in a considerable population drop which mystified the scientific community until 2015. In 2004, the surviving dinosaurs on Sorna were transported to Jurassic World on Isla Nublar, though it remains unconfirmed if the Spinosaurus was among them.[2]

Heavily built and fearsome, the base genome of the Spinosaurus is primarily grey with distinctive patterns of red across the body, and blue circular patterns across its impressive sail.

A territorial carnivore, Spinosaurus is among the largest predators available to the Hammond Foundation. In comparison to carnivores such as Tyrannosaurus and the Indominus rex, Spinosaurus is more tolerant of its own kind, and can happily coexist with another member of its species. The species also tolerates up to thirteen other dinosaurs in its enclosure, of various species. Like other spinosaurids such as Baryonyx and Suchomimus, Spinosaurus have a wetland need, requiring enclosures containing at least 5,114m² of water to avoid becoming stressed. In addition to the Carnivore and Live Bait feeders, Spinosaurus also feed from Fish Feeders.

Described as being potentially the largest theropod dinosaur ever discovered and recognizable by the large sail on its back, Spinosaurus remains have been found in Egypt, Tunisia, Morocco, and Niger. The first remains were found in Egypt by a German palaeontological team led by Ernst Stromer in 1915 and brought to a museum in Munich. Unfortunately, these fossils were destroyed during a bombing raid in World War II.

In the 1990s, new discoveries emerged revealing a crocodile-like snout, as well as bones indicating that Spinosaurus was among the largest theropods ever found. From the 1990s to the early 2010s, Spinosaurus was depicted as a primarily terrestrial carnivore with a body plan similar to that of other theropods. However, discoveries in 2014 and 2020 have revealed the animal had relatively short hind-limbs, and a long tail with neural spines, forming a flexible fin or paddle-like structure thought to be for swimming.[5] 2021 study however found that the degree of aquatic behavior attributed to Spinosaurus is not consistent, and the theropod could be a shoreline generalist.[6] Another 2022 research has published in agreement with the 2021 research, concluding that Spinosaurus was not adept at swimming and there are several Spinosaurus fossil recoveries throughout inner Africa, away from any significant body of water; even at early to mid cretaceous.[7]

The sail of Spinosaurus has also been a point of discussion, like that of Ouranosaurus, with some claiming it is a large sail for display or thermoregulation like Dimetrodon, others arguing it is a fat-filled hump like that of a camel for dry periods, while some believe it acted like a dorsal fin to help in swimming. The only species of Spinosaurus discovered was S. aegyptiacus. However, a potential second species was uncovered in Morocco in 1996, called S. moroccanus.

Spinosaurus lived in what is now northern Africa, in coastal wetlands covered with mangrove forests. It lived alongside similar large predatory theropods such as Bahariasaurus and Carcharodontosaurus, smaller theropods such as Rugops and Deltadromeus, the titanosaur sauropods Paralititan and Aegyptosaurus, large crocodylomorphs, pterosaurs, as well as plesiosaurs.

The design of the Spinosaurus in Evolution is based on its appearance in 2001's Jurassic Park III. The audio files used in the film were provided by Universal Pictures, in order to help the development team create the most authentic representation of the dinosaur.[8] It received a Species Profile on May 11, 2018.[9]

At launch, the Spinosaurus was notably smaller than the Tyrannosaurus, but the latter was eventually slightly downsized and the former's size was in turn increased in Update 1.4.[10] The Jungle skin was added to the game with Update 1.6.1 on December 19th, 2018 as a reward for community hitting donation reward for the 24h Frontier Charity Stream.[11] 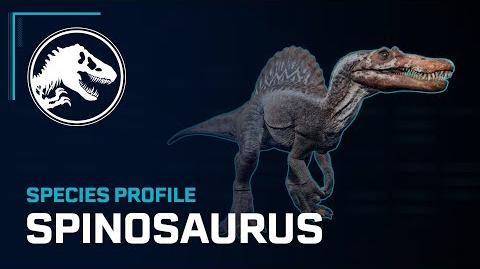 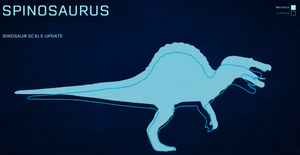 The scale of the Spinosaurus increased in Update 1.4