Spinoraptor is a genetically modified species of dinosaur, created by Dr. Henry Wu by combining the base genome of Spinosaurus with that of Velociraptor.

The Spinoraptor is the aggressive amalgamation of Velociraptor and Spinosaurus, possessing the cunning and ferociousness of its parent species. When the first Spinoraptor was released into the Tacaño Research Facility, it was discovered that it had been tampered with in the embryo stage by rivals of the Hammond Foundation, strengthening its hide and preventing it from being subdued by the ACU helicopter, necessitating the creation of a dinosaur capable of defeating the hybrid. Thereafter, the genome was perfected, resulting in more amenable specimens in future operations.

The Spinoraptor is similar in size to the Metriacanthosaurus, and while it shares many traits in common with small carnivores, it is capable of challenging and killing far larger predators. In addition, the Spinoraptor is a social animal and requires between two and four members of their species to remain content. It is the most docile of the hybrid theropods but will hunt guests more aggressively than its counterparts if it does escape.

Spinoraptor is counted as a medium carnivore, meaning it can be housed with small carnivores such as Velociraptor and Troodon, but will battle with the likes of Tyrannosaurus or Spinosaurus.

Prior to its inclusion in Jurassic World Evolution: Secrets of Dr. Wu, Spinoraptor first appeared in the mobile game Jurassic World: The Game as a hybrid of Spinosaurus and Utahraptor. 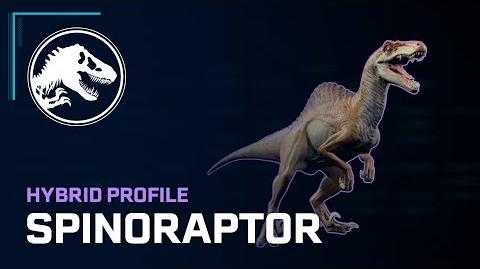