Sinoceratops is a genus of ceratopsid dinosaur that originated from Late Cretaceous Asia. Sinoceratops fossils are first unlocked on Isla Matanceros then excavated in the Xingezhuang Formation.

The Sinoceratops was first added to the game with the Fallen Kingdom Dinosaur Update.

Sinoceratops was recreated by InGen for Jurassic World on Isla Nublar. Several members of the species remained alive on the island in the aftermath of the park's abandonment, and many were encountered on the island during the 2018 mission to save the dinosaurs from the impending eruption of Mount Sibo.[1]

Many Sinoceratops were successfully transported from the now-destroyed Nublar to the Lockwood Estate in northern California, where they and the other dinosaurs were intended to be auctioned off on the black market. However, Claire Dearing and Owen Grady managed to put an end to the auction, and the surviving dinosaurs, including several Sinoceratops were released into the wilds of northern California.[1]

A relatively small ceratopsian, Sinoceratops is similar in size to relatives such as Chasmosaurus. Sinoceratops has a short, pudgy body, a round, curved frill, and one rhino-like horn. The dinosaur's base cosmetic genome has a moss green body with a cream colored underbelly, along with cream and orange markings on its frill.

Unlocked early in the main campaign, Sinoceratops has relatively high requirements compared to the other early game dinosaurs, one of the few with a social group exceeding. However, it is otherwise relatively easy to take care of. It may serve as an alternative or companion to Triceratops as a player's early game ceratopsian of choice.

Like all other ceratopsians, Sinoceratops will engage in a death duel with large and medium carnivores such as Giganotosaurus and Allosaurus if provoked.

Sinoceratops is a very social animal and requires at least one more of its own kind to maintain a healthy comfort level. It also has a high maximum social and population limit for a ceratopsian. Sinoceratops is capable of living somewhat peacefully alongside small carnivores such as Dilophosaurus and Velociraptor, only occasionally engaging in non-fatal territorial fights.

Sinoceratops was discovered in China by Xu Xing et al in 2010.[2]

Sinoceratops belongs to the Centrosaurinae branch of ceratopsids, which contained other species such as Styracosaurus, and was one of the largest of the group. Its discovery is significant, as it is the only known ceratopsid that lived outside of North America.

As opposed to its in-game depiction, the hollow frill parts of real-life Sinoceratops were covered with skin rather than exposed. The frill was also taller in real-life.

Sinoceratops lived alongside the hadrosaurs Tsintaosaurus and Shangtungosaurus, the titanosaur Zhuchengtitan, and the small ceratopsian Zhuchengceratops. The apex predator at the time was the massive Zhuchengtyrannus, which may have rivaled Tyrannosaurus in size.

The Sinoceratops was created using the 3D model that was created for 2018's Jurassic World: Fallen Kingdom by Industrial Light & Magic, as well as audio files provided by Universal Pictures to create the most authentic representation of the dinosaur.[3] 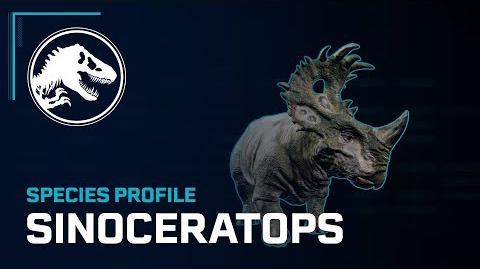 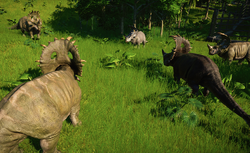