The base genome of Sauropelta has a grey body with dark grey armour running down its back. Most notably it has two huge spikes on it shoulders and smaller rows of spines along its neck. It also has a beaked mouth.

Sauropelta is an unsociable animal. It lives in pairs and doesn't like other animals around it. It'll fight with other armored dinosaurs, including other Sauropelta, if the exhibit is too crowded for its liking.

Due to the number of recovered Sauropelta specimens, it is one of the best-understood nodosaurids. Like all nodosaurs, it had bony armor running from its head to its tail though Sauropelta also had unique spikes on its neck. These large spikes may have been an adaptation to ward off predators, such as Deinonychus and Acrocanthosaurus.

Sauropelta lived in the Cloverly Formation which had wide floodplains around rivers that were covered in forests. Grasses would not evolve until later in the Cretaceous, so Sauropelta and other Early Cretaceous herbivores diets would consist of conifers and cycads. It lived alongside the large ornithopod Tenontosaurus, the smaller ornithopod Zephyrosaurus, rare titanosaur sauropods, the dromaeosaurid theropod Deinonychus, and the large theropod Acrocanthosaurus. 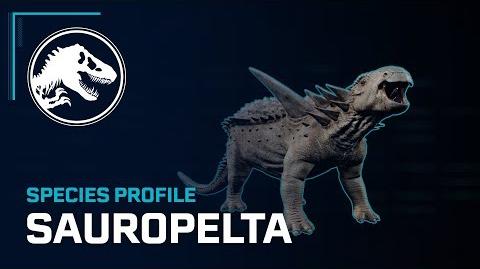 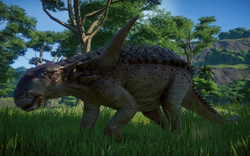