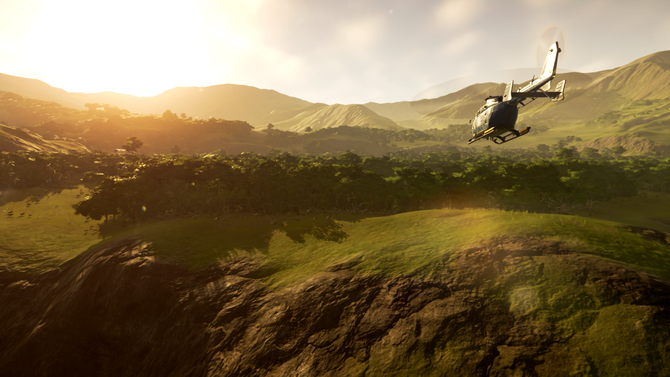 Sanctuary is an island in the Claire's Sanctuary downloadable content for Evolution. It is the second and last island available after rescuing the dinosaurs on Nublar North from the eruption of Mt. Sibo.

Sanctuary is a small island with an unknown location in the Pacific Ocean. It is being used by the Hammond Foundation as a suitable new habitat for the rescued Nublar dinosaurs. Claire Dearing and Cabot Finch are in charge of overseeing the operations.

Benjamin Lockwood’s Island Sanctuary was the intended refuge of the Isla Nublar dinosaurs from the imminently erupting Mount Sibo. Sanctuary was to be a place where the dinosaurs could live out their natural lives with minimal human intervention. Before this dream could be realized, however, Lockwood’s plans were hijacked by Eli Mills, who transported the dinosaurs to Lockwood Manor to be auctioned.

Much like the Muertes Archipelago and Isla Nublar, Sanctuary has the appearance of a volcanic island. The center of the island has numerous bays with beaches, while the outer edges of the island are surrounded by forested mountains and cliffs. Overlooking the bays are numerous small islands that provide a border around the inner section of the island.

The buildable area is located on a cliffside near the center of the island. Three sides are surrounded by low level mountains while the longer edge overlooks a beachside bay and the small island chain that borders around the main island. The entire buildable area is flat and wide which makes it one of the easier islands to build on.

The concept of Sanctuary was first introduced in the 2018's Jurassic World: Fallen Kingdom. Although the island is only mentioned by name, and never actually seen on screen, a diorama of it is seen in the Lockwood Manor, in which the Evolution version of the island is based on.

The plot of Claire's Sanctuary plays like a ‘what-if’ scenerio that mirrors the events of the 2018 film but with different outcomes. In the film, the rescue operation was a set up by Eli Mills, to transport Nublar dinosaurs to Lockwood Manor for an auction instead of safely taking them to Sanctuary. Meanwhile in the game, the events take place without the involvement of Mills, and Sanctuary is used for its intended purpose of harboring rescued dinosaurs.