Qianzhousaurus is a genus of tyrannosaurid dinosaur in Evolution 2, originating in Late Cretaceous Asia. Related to the larger Tyrannosaurus, the elongated snout of the Qianzhousaurus has earned it the nickname "Pinocchio rex".[1]

Qianzhousaurus is a medium sized tyrannosaurid, similar in appearance to its relatives Albertosaurus and Tyrannosaurus, though distinguishable by its elongated snout and slender physique. Qianzhousaurus have a pair of spiky crests above their eyes, as well as spikes running down its neck and torso.[1]

Qianzhousaurus is a sociable carnivore, preferring to live in small groups to avoid becoming stressed. However, they do not tolerate other carnivorous species entering their territory, which can lead to fights. However, if their environmental needs are met, they are a species which can be easily handled.[1]

Qianzhousaurus was discovered during the construction of an industrial park in Qianzhou, China, in 2010.[1] The genus is named after the place it was discovered, though it has been nicknamed the "Pinocchio rex" due to the length of its skull in comparison to other tyrannosaurids.[1] Qianzhousaurus is closely related to Alioramus, a similarly built dinosaur from Mongolia which lived roughly at the same time . Until the discovery of Qianzhousaurus , Alioramus was often considered either a one-off shoot of the tyrannosaurs or a juvenile Tarbosaurus. Some palaeontologists have proposed that Qianzhousaurus is an adult form of Alioramus, as only juvenile specimens of Alioramus have so far been discovered. Compared with the contemporary Tarbosaurus, both Alioramus and Qianzhousaurus are lightly built and lacked powerful jaws. It is theorised that they filled a niche hunting smaller, faster prey such as Ornithomimosauria, smaller ornithopods and oviraptosaurs.

Qianzhousaurus lived in the Nanxiong Formation. This site has yielded a diverse array of primitive and advanced oviraptosaurs, which would have been the main prey source for Qianzhousaurus. Other dinosaurs found here include the therizinosaur Nanshiungosaurus, the sauropod Gannansaurus and undescribed genera of hadrosaurs and larger tyrannosaurs.

Qianzhousaurus was first revealed to be in Evolution 2 with the release of its Species Field Guide on August 18, 2021. This was accompanied by a short article exploring the species on the official Frontier forums.[1]

The Qianzhousaurus is one of few species in Jurassic World Evolution 2 with no prior appearances in the franchise. 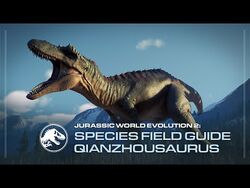