Pteranodon is a genus of flying reptile in the Jurassic World Evolution series. It originated from Late Cretaceous North America.

Unique among all species in Evolution, Pteranodon are bred and released in the Aviary, rather than a normal enclosure.

Released with the Return to Jurassic Park expansion pack, Pteranodon fossils are unlocked on 1993 Isla Nublar and can then be excavated from the Pierre Shale and the Smoky Hill Chalk. Upon completion of the Return to Jurassic Park story missions, Pteranodon becomes available in the main campaign by progressing through the Security Division on Isla Sorna.

Pteranodon were recreated by InGen on Isla Sorna, intending to exhibit them at the Jurassic Park Aviary prior to the 1993 incident. Following the incident, Sorna's Pteranodon population was mostly confined to the Isla Sorna Aviary but some were known to have escaped into the surrounding landscape at some point prior to 2001. In 2001, during the Isla Sorna Rescue Mission, Eric Kirby, Alan Grant, and others would encounter Sorna's aviary and be attacked by its Pteranodon inhabitants. During the attack, the main gate to the aviary was left unlocked, leading to the escape of many Pteranodon.[1] These escaped Pteranodon would later be captured by the InGen Security Division headed by Masrani Global.[2]

Between the opening of Jurassic World and until 2015, numerous Pteranodon were exhibited in the Jurassic World Aviary alongside the Dimorphodon. The Aviary would later be compromised during the 2015 Isla Nublar Incident by the rampaging Indominus rex, allowing the pterosaur population to escape and attack the park guests.[3] After the abandonment of Nublar and prior to the eruption of Mt. Sibo, the now wild Pteranodon population roamed the island undisturbed.

In 2018, with the eruption of Mt. Sibo, many Pteranodon were captured and taken to the Lockwood Manor in California. Maisie Lockwood would later release them into the wild; where they quickly traveled across North America, going as far as Las Vegas within the year.[4] A year after the events at Lockwood Manor, a Pteranodon was recorded catching a wedding dove.[5]

The base cosmetic genome of the Pteranodon has a dark brown base with creamy yellow countershading along the body and the wings. They are enclosed exclusively in aviaries, and each aviary can exhibit up to six individuals. There are multiple viewing points where guests can observe the animals up-close.

Every Pteranodon present within the aviary will preform a looped animation, occasionally flying to another part of the aviary. If the aviary is damaged by a storm, the Pteranodon will escape and despawn after flying at a certain height. Pteranodon will also fly around the islands as ambient animals.

Unlike other species in the game which are susceptible to diseases and attacks, Pteranodon can only die from natural causes related to its lifespan. Despite being considered piscivores, they do not require a feeder to survive. 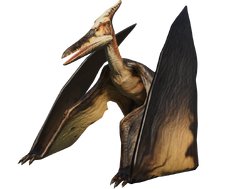 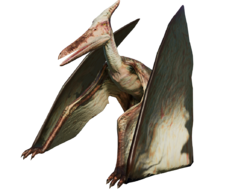 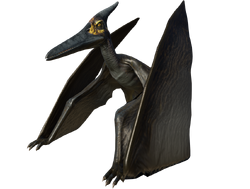 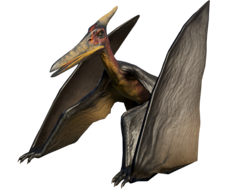 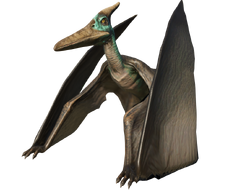 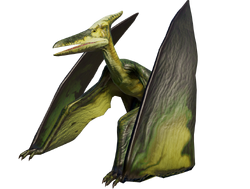 Pteranodon was first found by Othniel Charles Marsh in 1870, in the Late Cretaceous Smoky Hill Chalk deposits of western Kansas. The first pterosaur discovered outside of Europe, it was originally deemed a species of the much smaller and earlier Pterodactylus, but that changed when its skull was discovered, and thus its lack of teeth lend it its name. Since then, hundreds of specimens have been found, from all stages of development.

Originally, many different Pteranodon species were named, due to some individuals being larger and having a noticeable crest, but paleontologists have discovered those differences are due to sexual dimorphism, with females being smaller and crestless. Today, only two species are generally recognized: the traditional, straight crested Pteranodon longiceps, and the curve-crested Pteranodon sternbergi, which is sometimes classified as its own separate genus, Geosternbergia.

Pteranodon lived 88 to 80 million years ago, in the Western Interior Seaway, a swallow sea that split what is now North America into two continents, and more precisely in what is now the Niobrara Formation. Pteranodon shared its habitat with its smaller relative Nyctosaurus, toothed birds Ichthyornis and Hesperornis, plesiosaur Elasmosaurus, a large diversity of mosasaurs including Tylosaurus, and a huge array of both sharks and bony fishes.

A proven piscivore, Pteranodon is one of the few Mesozoic reptiles whose breeding strategy is known by paleontologists. Due to the smaller females being far more common than the males, even in bonebeds, it is likely Pteranodon was polygynous, with a single male mating with a large number of females, who would be the sole providers of parental care.

It received a Species Profile along with other Return to Jurassic Park species, on November 22, 2019.[6] 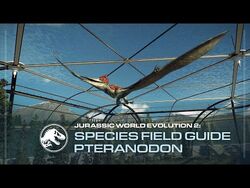