Proceratosaurus is a genus of theropod dinosaur that originated from Middle Jurassic Europe. Originally thought to be related to Ceratosaurus and later discovered to be a primitive tyrannosaur, Proceratosaurus is included in the Carnivore Dinosaur Pack and unlocked at Isla Matanceros by progressing through the Security Division.

Proceratosaurus was one of the species which InGen planned to feature at the original Jurassic Park on Isla Nublar. Viable embryos were created, through the animal itself was never hatched. However, a paddock was created before the 1993 incident.[1]

Proceratosaurus was among the many dinosaur embryos that Dennis Nedry stole from the Cold Storage Room at the beginning of the 1993 Isla Nublar Incident.[1] A report from the Dinosaur Protection Group states that the viable embryos on Nublar were all destroyed due to water damage to the cool room during the incident, and so all of InGen's DNA samples were lost during the evacuation of Site B. Its status was set to 'terminated' until new DNA samples were recovered.[2]

Proceratosaurus is a relatively small carnivore, around the same size as Deinonychus. It has a slender body and a characteristic crest down its snout.

Proceratosaurus is a sociable dinosaur which needs to be kept in small groups. Despite their small size, they are dangerous to hadrosaurs and other docile herbivores and will fight with other small carnivores. They can live together with armoured herbivores and sauropods.

Proceratosaurus was a mystery for much of its history, with the only fossil find of this dinosaur being a single fragmented skull. This skull was unearthed near the English town of Minichinhampton in 1910 and was thought to be yet another Megalosaurus fossil. However, in 1926, further studies of the skull found it was a completely different genus.

Initially, after this study, it was concluded that Proceratosaurus was a relative of the North American Ceratosaurus due to the assumed presence of a nasal horn, but later studies in the 1980s disproved this. It was then suggested to be a relative of Ornitholestes, a small North American theropod which was also believed to have a nasal horn. However, later studies in the early 2000s showed that the 'nasal horn' of Ornitholestes was actually the result of damage during fossilization and the two dinosaurs weren't closely related. Proceratosaurus was thus left as an enigma or maverick, with theories suggesting it was either an offshoot evolution that never developed into anything else or was part of a yet unknown theropod family.

Then in 2010, a major re-evaluation of Proceratosaurus and its relations to other theropods was published, placing it in the tyrannosaur lineage. This study came four years after the discovery of Guanlong, a similar Middle Jurassic theropod from China. Both genus shared an ornate nasal display. For much of its history, Proceratosaurus was reconstructed with a horn, but Guanlong revealed this was actually an elaborate crest formed from the premaxilla nasal bones. This crest was most likely used for display purposes. The breakthrough study of Proceratosaurus and Guanlong lead to the formation of the Proceratosauridae family, basal relatives of tyrannosaurs that would eventually dominate the Late Cretaceous. There are several other Proceratosauridae, including Yutyrannus, Sinotyrannus, and Kileskus. All genus in this family have crests, ranging from the large impressive crests of Kileskus and Guanlong, to the smaller horns and bumps of Yutyrannus.

Proceratosaurus itself is currently the oldest known tyrannosaur. Not much is currently known about its ecology, as no other dinosaur fossils have been found in Minchinhampton. 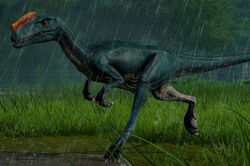