Pentaceratops is a genus of ceratopsid dinosaur that originated from Late Cretaceous North America. Pentaceratops fossils are first unlocked on Isla Sorna then excavated in the Dinosaur Park Formation and Kirtland Formation.

The game's tallest ceratopsian, Pentaceratops towers above its relatives such as Torosaurus and Styracosaurus. Pentaceratops has a huge frill crowned with bony growths and three large horns; one on its snout and two above its eyes. The dinosaur's base cosmetic genome is a rusty brown with dark blue and purple on its frill.

Unlocked near the end of the campaign, Pentaceratops has above average requirements but is otherwise relatively easy to take care of.

Like all other ceratopsians, Pentaceratops will engage in a death duel with large and medium carnivores such as Spinosaurus and Majungasaurus if provoked.

Pentaceratops is a moderately social animal and requires at least two more of its own kind to maintain a healthy comfort level but otherwise has a very low maximum social and population limit. Additionally, Pentaceratops is capable of living somewhat peacefully alongside small carnivores such as Dilophosaurus and Troodon, only occasionally engaging in non-fatal territorial fights.

Pentaceratops will, as all herbivores do, socialize with others of its own species on occasion, but otherwise behaves very similarly to other ceratopsians.

Pentaceratops was first discovered by Charles Hazelius Sternberg in 1921 near the San Juan Basin in New Mexico. Working on commission for the Swedish Uppsala University, Sternberg recovered a skull and rump, specimens PMU R.200 and PMU R.286, at the Meyers Creek near the Kimbetoh Wash in a layer of the Kirtland Formation. Later, in 1922, Sternberg began a dig in the Fossil Forest of San Juan County, New Mexico, where he discovered a complete skeleton of the dinosaur.

Although one of the larger ceratopsids of the Mesozoic Period, in-game, Pentaceratops is larger than its real-life counterpart.

Despite its name, the knobs on the side of the Pentaceratops head were determined to be outgrowths of the dinosaur's cheekbones rather than genuine horns.

Pentaceratops lived alongside other dinosaurs such as the hadrosaur Parasaurolophus, the Pachycephalosauridae Sphaerotholus, the armored ankylosauridae Nodocephalosaurus, and the tyrannosaurid Bistahieversor. The Kirtland Formation did not have many species of flowering plants and instead older plant types from the Mesozoic, such as cycads and ferns, still dominated the dinosaur's environment. 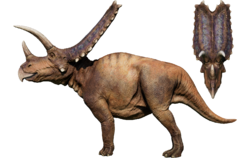 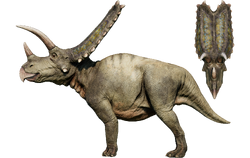 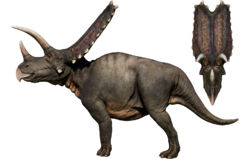 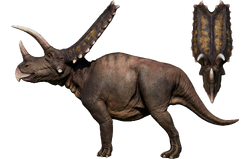 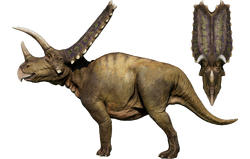 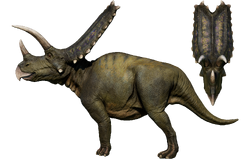 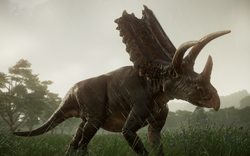