Parasaurolophus is a genus of hadrosaurid dinosaur that originated from Late Cretaceous North America.

Parasaurolophus fossils are first unlocked on Isla Tacaño then excavated from the Dinosaur Park Formation, Kirtland Formation, and Nemegt Formation.

Originating in Late Cretaceous North America, Parasaurolophus was among the first species cloned by InGen for Jurassic Park on Isla Nublar. By 1993, a herd of fifteen animals was present on Nublar, while thirteen were present on InGen's Site B facility on nearby Isla Sorna.[1] After the park was abandoned in 1993, continued attacks by Nublar's Tyrannosaurus had reduced the Parasaur population on the island to nine by 1994, with the remaining dinosaurs congregating close to other large herbivores for protection.[1]

In 2001, several Parasaurolophus were briefly encountered by those involved with the Isla Sorna Rescue Mission. They were found living alongside other herds of Corythosaurus.[3]

Upon the opening of Jurassic World in 2004, Parasaurolophus was one of the many species exhibited on Isla Nublar, living peacefully alongside other species of herbivores. Juvenile Parasaurs could be approached by visitors in the Gentle Giants Petting Zoo, while adults were seen congregating in the Gyrosphere Valley.[1][4]

Three years after the 2015 Isla Nublar Incident, many Parasaurolophus were transported to the Lockwood Manor in California, USA. These dinosaurs were later released into the wilds of Northern California by Maisie Lockwood.[5]

A year after the events at Lockwood Manor, a Parasaurolophus is seen drinking from a river by several people on a canoe.[6]

Parasaurolophus is an average sized hadrosaur, but is otherwise distinguished by its prominent, curved crest. The base cosmetic gene of the Parasaurolophus has a light brown body, a white underbelly, a reddish back and crest, and dark brown stripes on its legs.

Unlocked sequentially after Corythosaurus, the dinosaur's requirements present the player with a moderate increase in complexity as it is the first hadrosaur they will encounter with a social group minimum requirement of 4. Its other requirements are relatively easy to manage, with a moderately long lifespan and fairly good resistance to illness, it differs in that it can be kept in a smaller exhibit than other dinosaurs. Its incubation cost is also relatively low.

Parasaurolophus behaves similarly to the other hadrosaurs and is able to socialize and herd with them in normal circumstances. A herd is a necessity for this dinosaur due to their high minimum social requirements. They can otherwise mix well with other herbivorous dinosaurs with large maximum population limits.

Like all other hadrosaurs, Parasaurolophus is vulnerable to predation from most carnivores, meaning that its sole defense against predators is to avoid them.

Parasaurolophus was discovered in 1920 by a group from the University of Toronto in Alberta, Canada. The name Parasaurolophus means 'Near Crested Lizard', as early paleontologists originally believed this dinosaur was a direct relative of a genus called Saurolophus, though this is no longer accepted.

The dinosaur is known for its distinctive head crest, a point of discussion for many years since the genus was discovered. Some early paleontologists thought, among other theories, that it was used as a defensive weapon or as a way to push branches out of the way as it roamed through dense growth. The most common belief, especially in modern times and for all other crested hadrosaurs, is that the crests were used as an amplifying chamber for communication and for displaying to potential mates.

In-game, Parasaurolophus fossils can be found in the Nemegt Formation in Asia despite no specimens of the dinosaur having never been found there. This may be a reference to Saurolophus, which Parasaurolophus' name references, or to Charonosaurus, a large Asian hadrosaurid that greatly resembled Parasaurolophus.

Parasaurolophus lived in a warm, swampy environment with lots of rivers and floodplains, alongside other dinosaurs such as the hadrosaur Corythosaurus, the ceratopsians Chasmosaurus, Pentaceratops, and Centrosaurus, the ornithomimid Struthiomimus, the armored Ankylosaurus and Edmontonia, as well as the tyrannosaurid Albertosaurus.

The design of the Parasaurolophus in Evolution is based on its depiction on the pre-production models made for 1997's The Lost World: Jurassic Park.[7] The audio files used in the film were provided by Universal Pictures, in order to help the development team create the most authentic representation of the dinosaur.[8] It was first revealed in the announcement trailer that was released at Gamescom 2017.[9] It received a Species Profile on March 9, 2018.[10]

For the Return to Jurassic Park expansion pack, Parasaurolophus received six additional cosmetic skins that are based on its various depictions in the Jurassic series. 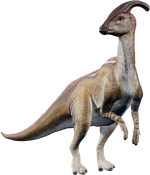 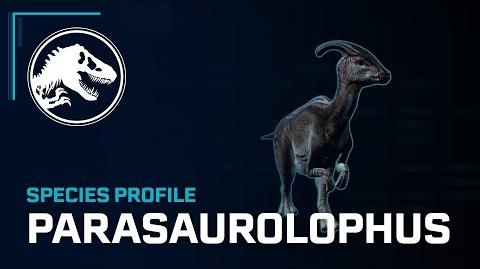