Pachycephalosaurus fossils are first unlocked on Isla Pena, then excavated from the Hell Creek Formation, Lance Formation, and Scollard Formation.

Originating in the Late Cretaceous period of North America, Pachycephalosaurus was bred by InGen on Isla Sorna, intended for eventual exhibition in Jurassic Park on Isla Nublar. Nine individuals were known to have been created by 1993.[1]

During the 1997 incident, several Pachycephalosaurus were encountered by InGen teams on Isla Sorna.[2]

By 2015, Pachycephalosaurus was among the dinosaurs featured in Jurassic World, most prominently in the park's Pachy Arena.[3] Following the 2015 Isla Nublar Incident, all surviving Pachycephalosaurus were left to roam wild across the island. With the subsequent eruption of Mt. Sibo, it is unknown if any survived.[1]

Pachycephalosaurus is the largest pachycephalosaurid, significantly larger than its relatives Stygimoloch, Dracorex, and Homalocephale. It has a domed head and bony bumps at the back of its head and down its snout. The dinosaurs base cosmetic gene is a tan, light brown covering its underside, with blue mottling along its back and sides.

Although it is unlocked relatively late in the campaign on Isla Pena, its requirements are modest compared to other dinosaurs unlocked on the same island. Though easier to contain, they will provide little benefit to the player in terms of space efficiency or dinosaur rating on the limited confines of Pena.

Pachycephalosaurus prefers to be kept in moderately sized groups of between three and six individuals and a small population of, at maximum, ten other dinosaurs. Pachycephalosaurus will attack each other in territorial fights or death duel headbutting contests if their social group maximum has been reached or exceeded respectively.

Pachycephalosaurus ("Thick-headed lizard") was discovered in the late 1800s in the American West by various groups. The first fossils specimens found were skulls which fossilized easily, being that they would have been the hardest part of the body. The hardened head was most likely used in contests with rivals for mating or status in the herd, though they wouldn't have headbutted like modern-day goats and instead would've struck each other on the flanks.

Pachycephalosaurus lived alongside many other Late Cretaceous dinosaurs including the hadrosaur Edmontosaurus, the ceratopsians Triceratops and Torosaurus, the Ankylosauridae Ankylosaurus, the ornithomimid Struthiomimus, as well as the theropods Troodon and Tyrannosaurus.

The design of the Pachycephalosaurus in Evolution is based on its appearance in 1997's The Lost World: Jurassic Park. The audio files used in the film were provided by Universal Pictures, in order to help the development team create the most authentic representation of the dinosaur.[4] It was first revealed in the pre-order trailer that was released in March of 2018,[5] and received a Species Profile a day after.[6]

With Update 1.8, Pachycephalosaurus, along with Stygimoloch and Dracorex, were given the ability to fight and kill small carnivores. 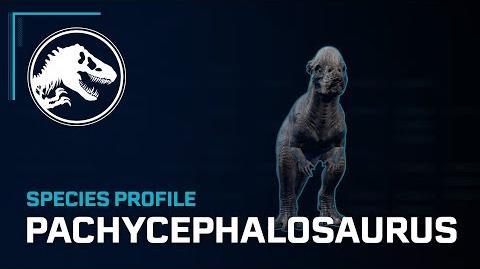