Olorotitan is a genus of hadrosaurid dinosaur that originated from Late Cretaceous Asia. A large, graceful herbivore, Olorotitan is included in the Secrets of Dr. Wu DLC and becomes available to Hammond Foundation operations upon completion of the Science Division mission in the Muerta East facility.

Olorotitan is one of the largest hadrosaurs available to the Hammond Foundation. While they are mostly bipedal, Olorotitan stand on all four limbs in a quadrupedal manner while feeding.

The base genome of the Olorotitan is light brown with creamy underbelly that turn into stripes that cover the tail. They have bright colored crests and additional orange stripes that go along the body.

Olorotitan has a minimum herd requirement of three individuals and is unique in that it requires a population of four, either of fourth Olorotitan or another dinosaur. Due to their population tolerances, they make excellent additions to mixed herbivore exhibits. However, it is not advised to house them with most carnivorous species, as, like other hadrosaurs, they cannot defend themselves.

Olorotitan was discovered in eastern Russia's Udurchukan Formation, and described by Pascal Godefroit in mid-2003. Its name means "titanic swan" for its neck, which was much longer than those of other hadrosaurs. It was closely related to the more famous and well-known Lambeosaurus, as well as Corythosaurus, Tsintaosaurus, and Hypacrosaurus. The elaborate crest of the Olorotitan has helped paleontologists in reconstructing a more accurate crest for the Tsintaosaurus, which was initially believed to have a horn that resembles that of a narwhal.

The Udurchukan Formation and the overlying Yuliangze Formation on the Chinese bank of the Amur River were rich in hadrosaur fossils. The most complete after Olorotitan is Charonosaurus, which closely resembled Parasaurolophus. Other hadrosaur genera found here include Kerberosaurus, Amurosaurus, and Kundurosaurus. The main predator of this area was Tarbosaurus, a close relative of Tyrannosaurus. A variety of other dinosaur fossils have been found, including nodosaurs, dromaeosaurs, ornithomimids, and titanosaur sauropods. However, none are currently assigned to any genera. The climate of the region was warm and swampy, with a large variety of turtles, early mammals and crocodiles also being found here. 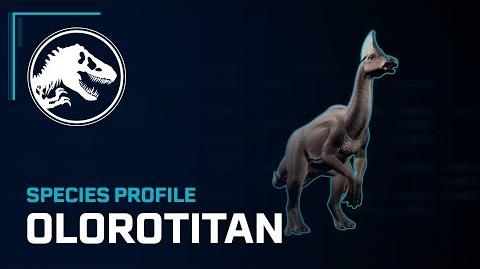