Nodosaurus is a genus of nodosaurid dinosaur that originated from Late Cretaceous North America. One of the first armored dinosaurs discovered in North America, Nodosaurus is unlocked by the Hammond Foundation upon completion of the Science Division mission on Isla Tacaño.

A burly and broad-bodied dinosaur, Nodosaurus is covered in thick bony scutes with spikes running along its back and tail. The base genome is a soft brown color.

Much like Ankylosaurus, Nodosaurus has excellent defenses, yet a short lifespan and poor immunity. However it is one of the cheaper dinosaurs available and has relatively low space needs. The inexpensive incubation of Nodosaurus means that its genes can be edited so that it can have a longer lifespan and better immunity without raising the price too high.

Nodosaurus isn't a very social animal, though it isn't quite as hostile as Sauropelta. It can live alone, in a small group of four or less, or alternatively with seven other dinosaurs. It can be used to make an armoured dinosaur display with Ankylosaurus, Crichtonsaurus, and Polacanthus.

One of the first armored dinosaurs discovered in North America, Nodosaurus is a medium sized herbivore, discovered by Othniel Marsh in 1889. Despite being a type genus of the Nodosauridae family, Nodosaurus is only known from incomplete remains including pieces of armor, spine and hip. Paleontologists have a decent idea of what this dinosaur could have looked like, due to their knowledge of better known relatives such as Edmontonia and Borealopelta.

The nodosauridae family are recognizable from the Ankylosauridae by their lack of tail clubs and narrower mouths, suggesting they were more selective about their diets.

Nodosaurus lived 100 million years ago in coastal plains, which now are the Frontier Formation of Wyoming. The only other dinosaur known to have lived during the same time period is another relatively unknown ankylosaur, Stegopelta. 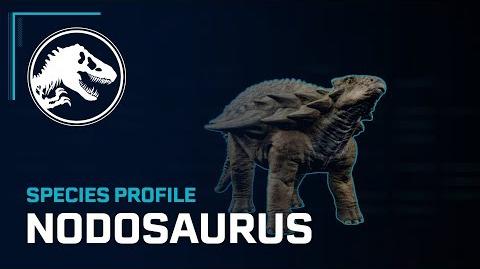