Mosasaurus is unlocked in the Jurassic World Chaos Theory level and in Challenge Mode, and its fossils can be excavated from the Fox Hills Formation in North America and the Maastricht Formation in Europe. Once one has been researched and successfully released, the species becomes available for use in Sandbox Mode.

In 2000, Dr. Henry Wu and InGen were able to extract DNA from a Mosasaurus fossil specimen using a prototype iron analyzer.[1]

The Mosasaurus became Jurassic World's star attraction where it would jump up and catch a shark to feed on in the Mosasaurus Feeding Show. After the park's Pteranodon and Dimorphodon population escaped from the Jurassic World Aviary during the 2015 Isla Nublar Incident, the Mosasaurus managed to devour one of the flying reptiles that was also attacking Zara Young. The Mosasaurus eventually leaped out from its lagoon to kill and feed on the rampaging Indominus rex.[2]

Six months after the fall of Jurassic World, the Mosasaurus remained in its lagoon until mercenaries sent by Eli Mills and Dr. Henry Wu entered the island to retrieve a DNA sample of the Indominus rex. The Mosasaurus managed to devour some of the mercenaries and swam out to the Pacific Ocean after the lagoon's gates were left open.[3] A year after the events at Lockwood Manor, the Mosasaurus was recorded feeding on a great white shark that had just caught a sea lion.[4]

The largest member of its family, the Mosasaurus is one of the largest marine reptiles, growing up to 17 meters in length, and lived in the Late Cretaceous period from 82 to 65 million years ago in the Atlantic Ocean. The Mosasaurus greatly resembles the Tylosaurus, but had a more robust physique.

In Evolution 2, Mosasaurus has a base appeal of 2,500, the highest of any species. As such, they are a very popular species among all guest types and can provide an immediate boost to park rating and revenue.

Mosasaurus are a solitary species which do not tolerate any other member of their kind within their Lagoon, or the closely related Tylosaurus, which can result in potentially deadly fights. They tolerate smaller marine species such as Ichthyosaurus and Plesiosaurus, preying upon anything they can sink their jaws into. A unique attribute of the Mosasaurus is its ability to feed from suspended Shark Feeders, allowing the species to lunge out of the water and devour a shark. This makes the Mosasaurus the first marine reptile to eat from Shark Feeders, the second being the considerably smaller Kronosaurus. 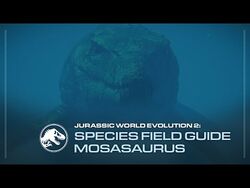