Majungasaurus is a genus of abelisaurid dinosaur that originated from Late Cretaceous Africa, specifically Madagascar. A powerful predatory dinosaur and one of the best-studied theropods, Majungasaurus is unlocked by progressing through the Entertainment Division on Isla Sorna, and can subsequently be obtained in the Research Center.

The Majungasaurus was first added to the game with the Deluxe Dinosaur Pack.

Although InGen wasn't known to have cloned any specimens of Majungasaurus for exhibition in Jurassic World on Isla Nublar, by 2012, the company had possession of the carnivore's genetic material, which was used in part to create the genetically modified superpredator known as Indominus rex.[1]

Majungasaurus can live alone or in pairs. They're dangerous animals that will engage in death duels with herbivores that are far larger than themselves, and they will kill any dinosaur with low defense traits.

Despite their aggressive nature, Majungasaurus are one of the easier carnivorous dinosaurs to keep due to their relatively low comfort threshold.

Majungasaurus is a close relative of Carnotaurus that is found exclusively in Madagascar. This dinosaur was briefly called Majungatholus, a name which is now considered a junior synonym of Majungasaurus.

The Abelisauroidea superfamily evolved from primitive carnivores such as Ceratosaurus from the Jurassic. They lived in continents and countries isolated from Laurasia; Asia, Europe, and North America. They could be found in Africa, Australia, India, Madagascar, and South America. Majungasaurus so far has been the largest carnivore from Madagascar's Maevarano formation and was the top predator of its time.

There is also evidence for cannibalism in Majungasaurus, with bones showing bite marks that could only be made by other Majungasaurus. Albeit its unclear if these cases represent scavenging on carcasses or active cannibalism.

Majungasaurus inhabited a coastal flood plain cut by many sandy river channels with a semi-arid climate. There, it lived alongside the sauropod Rapetosaurus, which was its main prey, as well as smaller carnivores such as Rahonavis and Masiakasaurus. Masiakasaurus belongs to the Noasauridae family, which are closely related to Abelisaurids, but occupied a niche for smaller and more specialized hunters. 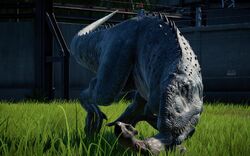 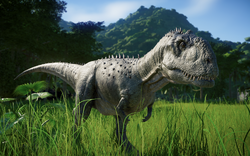