Kentrosaurus is one of the smallest stegosaurid dinosaurs in Jurassic World. It has a long narrow skull and a pair of spikes on its shoulders. Uniformed rows of narrow plates run from its neck to its pelvis, which are then replaced by spikes which run to the end of its tail. The base genome of Kentrosaurus is a dark brown color with a creamy underbelly and striped spikes and plates.

In comparison to its larger relative Stegosaurus, the needs of Kentrosaurus are fairly manageable. They require at least three other individuals of their species to fulfil their social needs, and prefer living in an enclosure containing between three and seventeen other dinosaurs of various species. Like other stegosaurids, Kentrosaurus is capable of defending itself against medium and large carnivores, attacking with its dangerous tail during fights. They can be safely housed with small carnivores such as Velociraptor and Proceratosaurus.

Kentrosaurus require at least 4,903 m² of grassland, and 3,332m² of forest, and feed from either Ground Herbivore Feeders, or the Ground Paleofeeder with the addition of the Claire's Sanctuary expansion pack. With the palaeobotany mechanic added with Claire's Sanctuary, Kentrosaurus show a primary preference for Paw Paw, with secondary preferences for Mosses and Cycads. Conversely, however, they are harmed if they consume Rotten Wood, Horsetails or Palms.

Kentrosaurus was first discovered between 1909 to 1911 by a German expedition to Tanzania, then called German East Africa. Around 70 fragmented skeletons were found together, showing these dinosaurs moved in herds. After Stegosaurus, Kentrosaurus is the second most well-known stegosaur in popular culture and is more closely related to the latter, than it is to Asian and European stegosaurs such as Chungkingosaurus, Dacentrurus, and Lexovisaurus, although it shares a similar appearance with plates in straight pairs on the back and with an extra pair of spikes on its shoulders.

The Tendaguru formation in Tanzania is very similar to the Morrison Formation in North America, with inhabiting sauropods such as Dicraeosaurus and possibly Giraffatitan and the ornithopod Dysalotosaurus. A variety of therapods also lived here, including the earliest known carcharodontosaur and spinosaur: Veterupristisaurus and Ostafrikasaurus, respectively. 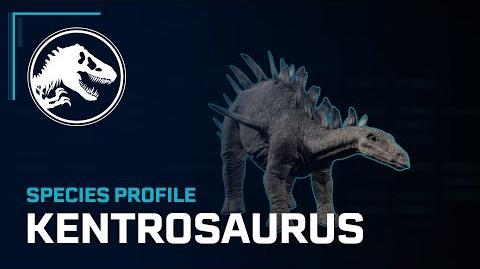