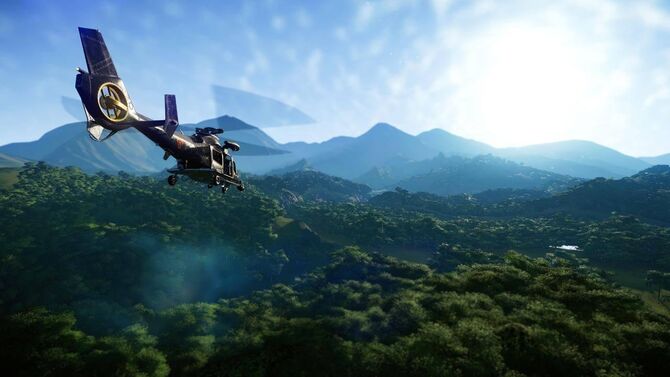 Isla Sorna, also known as Site B, is the largest island in the Muertes Archipelago. It is hit often by storms, but its large size provides benefit to the player to add many dinosaurs. It is unlocked once the player has reached 3 stars on Isla Pena.

Isla Sorna was referred to as Site B by InGen as a production facility for cloning and engineering dinosaurs. They would later be transported to Isla Nublar for the attractions in Jurassic Park.
Its name means 'sarcasm island'.
The island forms the largest of the Muertes Archipelago, also known as Las Cincos Muertes, or the Five Deaths. It is situated 333 miles to the west of Costa Rica, and comprises of granite cliffs and dense forest.

In the mid-1980s, Isla Sorna, together with Isla Nublar and the other islands of the Muertes Archipelago, were sold to InGen by the Costa Rican government in a 99-year lease over the islands.[3] The island was purposed into a research facility and factory floor on which dinosaurs were initially cloned and matured, before being transported to the Jurassic Park facility on Nublar. The first dinosaur cloned by InGen was successfully bred on Sorna in 1986, while the first mature specimens were shipped from Sorna to Nublar in 1988.[4]

Soon after the Isla Nublar Incident in 1993, Isla Sorna was hit by the powerful Hurricane Clarissa, forcing InGen to abandon the island. In the aftermath, a stable ecosystem of the island's dinosaurs began to form, with dozens of species flourishing in regions of the expansive island habitat. Eager to ensure the planet's isolation, InGen's ailing CEO John Hammond dispatched a team led by Dr. Ian Malcolm to document the island's inhabitants, in an effort to raise public support for the island to be designated as a restricted nature preserve.[2]

In 1997, a young British girl was attacked and injured when her family happened upon the island, prompting Hammond's nephew, Peter Ludlow, to wrest control of InGen from him and begin a mission to capture the island's dinosaurs and bring them to a new park under construction in San Diego.[2] Hammond's team soon came into conflict with Ludlow's hunters, setting dozens of dinosaurs free, though marooning both groups on the island. Although both groups eventually joined together to survive the island's perilous dangers, they became separated when a pair of Tyrannosaurus attacked their camp. Despite numerous fatalities, the male Tyrannosaurus was sedated and brought back to San Diego, where it promptly escaped onto the city streets before being caught and transported back to the island alongside its offspring.[2]

After the San Diego Incident, the United States Congress passed the Gene Guard Act, which restricted any further access to Isla Sorna and the other islands owned by InGen, as well as banned any further cloning of extinct animals. Nevertheless, within one hundred days of Masrani Global's purchase of InGen, a team of InGen scientists travelled to Sorna and began experimenting on several new species of dinosaur, including Ankylosaurus, Ceratosaurus, Corythosaurus and Spinosaurus.[5] These animals were abandoned on Isla Sorna in 1999, and encountered by the survivors of a plane crash on the island in 2001. Reports of these animals were subsequently buried by "bribed officials" after the incident.[5][1]

The introduction of these illegally cloned dinosaurs, specifically a super-predatory Spinosaurus, had a devastating impact on Isla Sorna's ecosystem, causing a "considerable and mystifying drop in population", which remained unexplained until leaked documents in 2015 revealed the illegal cloning activities of the late 1990s.[6] In 2004, in an effort to save the island's inhabitants from extinction, Simon Masrani had Isla Sorna's surviving dinosaurs shipped to Isla Nublar, where they would eventually be exhibited alongside recently cloned animals in Jurassic World.[6] As of 2018, Isla Sorna is reportedly abandoned, though it remains restricted.[6]

The final island unlocked in Jurassic World Evolution, Isla Sorna proves a unique challenge relative to the other islands. When players arrive on the island, 15 Stegosaurus and 1 Spinosaurus will be found roaming freely without fences. Players can then decide whether to enclose the dinosaurs or sell them. The Island itself is comprised of 3 distinct large, open areas separated by a series of narrow corridors that must be connected via path or monorail. A pre-built facility is situated around the entrance monorail containing a Medium Power Station, Pylons, Paths, a Substation, Storm Defense Station, ACU Center, and a Security Center, all of which is surrounded by Concrete Wall fencing.

Return to Jurassic Park DLC introduces a new area on Isla Sorna that takes place in the year 1993 during the aftermath of the infamous Jurassic Park incident. The area is comprised of five different sections that are separated by a series of narrow corridors with numerous wild dinosaurs scattered around the map.