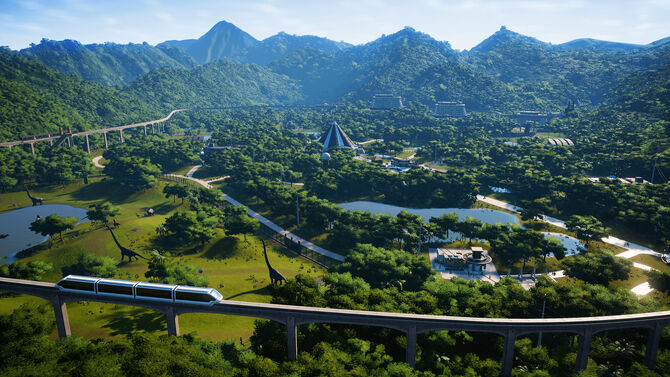 Isla Nublar is a volcanic island located 120 miles west of Costa Rica, and 87 miles east of the Las Cinco Muertes archipelago. The island was the site of both the original Jurassic Park and its second incarnation—Jurassic World.[1]

Isla Nublar was the site of the original Jurassic Park and the resultant 1993 Isla Nublar incident, as well as Jurassic World theme park, and the following 2015 Isla Nublar incident.
Its name means 'clouded island'.
The island is remote, being 120 miles off the west coast of Costa Rica. Its surface area is 22 square miles. The many mountain ridges create a variety of ecological niches.

Under the leadership of billionaire John Hammond, InGen began development of Jurassic Park, where resurrected dinosaurs would be displayed to the public. Prior to the opening of the park, in an act of corporate espionage, a rival genetics company sought out disaffected park worker Denis Nedry to upload a virus into Jurassic Park's security system and steal the dinosaur embryos stored on the island.[2] Nedry's plan was later set into motion, and by disabling the electrified fencing, many of the island's dinosaurs broke free from their enclosures, resulting in numerous deaths and the abandonment of the island to the dinosaurs.[2] In the aftermath, the events on Isla Nublar were successfully covered up by InGen. A year after the incident, clean-up teams were sent to the island to bring it under control.

In 1997, Masrani Global acquired InGen and began preparations for the construction of "Jurassic Park's second incarnation" on Isla Nublar.[3]

The new park, Jurassic World, was successful, attracting thousands of visitors each day, but by 2015, profits began to decline. As a result, InGen decided to create a dinosaur hybrid dubbed the Indominus rex in an effort to boost public interest. However, in December 2015, the Indominus escaped from its enclosure and began rampaging across the island, leading to a series of events that required the evacuation of Jurassic World and the abandonment of the island itself to the park's escaped dinosaurs.[4]

After the incident, the remaining dinosaurs on Isla Nublar were left to fend for themselves, mostly abandoned by the outside world. In 2017, Mount Sibo, the island's once dormant volcano roared to life, threatening the last remaining dinosaurs with extinction and igniting a debate as to whether they should be saved.[5][6] In 2018, a team organized by Eli Mills would capture many of Nublar's remaining dinosaurs, which were then taken to the Lockwood Manor in California, USA. Isla Nublar was destroyed by the eruption of Mt. Sibo soon after.[5]

Isla Nublar was the sole home to sandbox mode in Jurassic World Evolution prior to Update 1.10, which added the mode to all islands of the Muertes Archipelago. Sandbox mode allows the player unlimited funds and power to create their idealised park without the restrictions present on the other islands. As players progress through the main campaign on the Five Deaths, the research and dinosaurs that are unlocked will become available on Nublar, which itself is unlocked with a four star park on the first island, Isla Matanceros.[7] In addition to unlimited funds, players can also control other sandbox settings such as the time of day, which can variate between daytime, dusk, and night, the severity of weather events, and the frequency of disasters such as power outages, disease epidemics, and dinosaur escapes.[7]

Nublar North is a section of Isla Nublar that appears in the Claire's Sanctuary DLC. It is the first of two maps that players reach during the DLC, the other being Sanctuary. The map has a rough U shape with several narrow areas between larger and more spread out ones. Rumbles and shimmers from Mt. Sibo will occasionally shake the player's screen.

Return to Jurassic Park DLC introduces a new area on Isla Nublar that takes place in the year 1993 during the aftermath of the infamous Jurassic Park incident. The area is a large, circular, and mostly open space with numerous dinosaurs either roaming freely or enclosed. The park is found in a state of emergency with compromised fencing surrounding a central operations facility area containing damaged buildings. 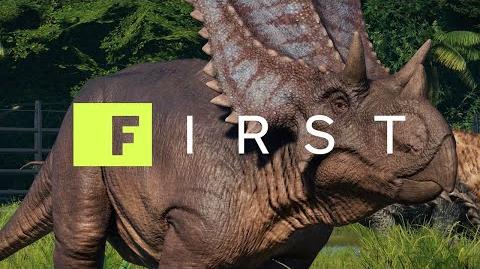 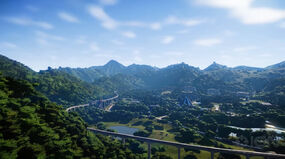 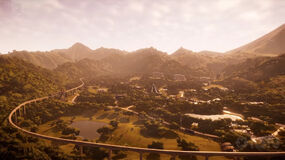 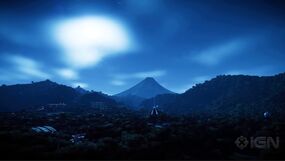 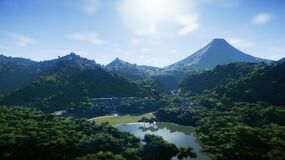