Indoraptor is a genetically modified species of dinosaur in the Jurassic World Evolution series. The Indoraptor was created by Dr. Henry Wu by combining the base genome of Indominus rex with that of Velociraptor.

In Evolution, the Indoraptor was first added to the game with the Fallen Kingdom Dinosaur Update. Indoraptor can't be unlocked through typical means, and instead requires the full genome of both Indominus and Velociraptor, five Research Centers across the islands of the Muertes Archipelago and a high rating with the Security Division on Isla Sorna. Once these criteria have been met, Indoraptor can be unlocked via genetic research.

After the creation of Indominus rex under a secret agenda, Dr. Henry Wu was taken to a secure location to develop a new species of hybrid dinosaur for military use, after the former escaped and wreaked havoc on Isla Nublar in 2015.[1] After retrieving a bone from Indominus on the now-deserted Nublar, a team of mercenaries hired by Eli Mills brought the sample to Wu, who used it to perfect the design. By combining the genomes of Indominus rex and Velociraptor, Wu tried to create the perfect specimen to use in combat. However, the first Indoraptor was a prototype that lacked the social skills to obey and follow command, which made it all the more lethal.[2] Shortly after the eruption of Mount Sibo on Isla Nublar, the Indoraptor specimen was almost sold in an auction for the surviving dinosaurs, though later escaped, pursuing Maisie Lockwood, Owen Grady, and Claire Dearing across the Lockwood Manor. The hybrid fought against the Velociraptor Blue, and after a protracted chase, he fell and got fatally impaled by the brow horns of an Agujaceratops skull.[2]

Indoraptor shares many similarities with Indominus rex though is only about half the body length. It has black scales and a pair of orange streaks running down its sides. A series of quills also decorate its back and head. The forelimbs of the Indoraptor are nearly as long as its hindlimbs, which enables it to stand, walk, and run on all fours.

Indoraptor is an extremely aggressive hybrid. It'll try to escape like other dinosaurs, but will kill many more guests. It can't coexist with others of its own kind (unless specific social genes are applied to it prior to incubation) and it will kill almost anything up to the size of a Spinosaurus. Its behaviour is reminiscent to that of Indominus rex and Velociraptor. It'll fight with most dinosaurs it's enclosed with, including far larger carnivores such as Tyrannosaurus. However, Indoraptor will not attack large sauropods such as Apatosaurus and Brachiosaurus, and can therefore be exhibited with them.

The Indoraptor was created using the 3D model that was created for 2018's Jurassic World: Fallen Kingdom by Industrial Light & Magic, as well as audio files provided by Universal Pictures to create the most authentic representation of the dinosaur.[3] 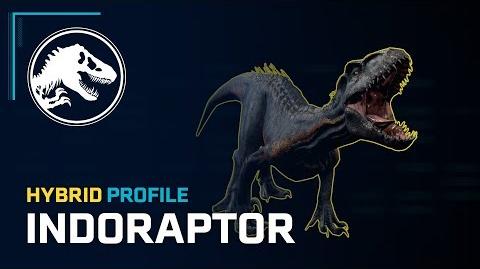