Indominus rex is a genetically modified species of dinosaur in the Jurassic World Evolution series, created by InGen by combining the base genome of a Tyrannosaurus with that of a Velociraptor. The first official hybrid created by InGen, it also contained the genetic material of numerous other species, including dinosaurs such as Carnotaurus, Giganotosaurus, Majungasaurus, as well as an assortment of modern species.

In Evolution, the creation of Indominus requires the complete genome of Tyrannosaurus and Velociraptor, and can subsequently be unlocked on the islands of the Muertes Archipelago via the Research Centre once the player has reached Isla Pena. The Indominus rex exclusive Adaptive Camouflage Gene was added with the Secrets of Dr. Wu DLC.

In Evolution 2, the Indominus rex is unlocked through Challenge Mode and the Jurassic World Chaos Theory mission, requiring the genome of Tyrannosaurus, Velociraptor and Giganotosaurus. Once successfully incubated and released, the Indominus becomes available in Sandbox Mode.

The brainchild of Dr. Henry Wu, Indominus rex was originally created by InGen to revitalize public interest in Jurassic World on Isla Nublar, which, after operating successfully for over ten years, had begun to experience a decrease in visitor rates.[1] By combining the genome of Carnotaurus, Deinosuchus, Giganotosaurus, Majungasaurus, Rugops, Therizinosaurus, Tyrannosaurus, and Velociraptor,[2] as well as the genome of modern animals such as cuttlefish, tree frogs and pit vipers. Two Indominus were born and as the years passed on, one ate the other.[1]

However, with the extreme intelligence of a Velociraptor, Indominus escaped from its exhibit and caused mayhem across Isla Nublar, though was ultimately stopped due to the combined efforts of the park's T. rex, a Velociraptor named Blue, and the park's resident Mosasaurus.[1]

Dragged beneath the waters to its death, the skeleton of Indominus was later discovered by a team of mercenaries sent to the island, who recovered a piece of a bone from the dead hybrid. Despite sustaining attack by the T. rex combined with casualties by the Mosasaurus, the mercenaries received the material and brought to Dr. Wu, who used it during the creation of Indoraptor, which combined the Indominus genome with that of a Velociraptor. After the death of Indoraptor, the Indominus bone was crushed by the T. rex, preventing its use in the creation of more hybrids.[3]

Indominus rex is a massive theropod, estimated by Dr. Henry Wu to be fifty feet long when fully grown. It has a sloped muzzle like Giganotosaurus and osteoderms down its back similar to abelisaurids such as Carnotaurus and Majungasaurus. Rows of spines or quills are also present on its neck. The arms are massive and very dexterous, due to the inclusion of Therizinosaurus gene. The base genome of Indominus is ghostly white with deep red eyes.

Indominus rex is an incredibly aggressive and intelligent carnivore, with an extremely high intolerance for deviations from its comfort levels. Even in comparison to other large carnivores such as Tyrannosaurus, Indominus is an asocial animal which doesn't tolerate other members of its species in its enclosure (unless, however, Group Adaptation genes are applied before incubation). It is extremely territorial and aggressive, killing almost anything that enters its enclosure. Given its strength and intelligence, the Indominus is the only dinosaur capable of killing sauropods such as Brachiosaurus and Dreadnoughtus, although it does tolerate smaller carnivores such as Velociraptor.

In Evolution 2, the Indominus rex has, along with the Indoraptor, the highest appeal of any dinosaur, making them a popular attraction with guests, though their vicious nature means they are difficult to keep contained. The Indominus is a highly territorial and aggressive species, and does not tolerate any other member of their kind, or any other species, other than Velociraptor, in their enclosure. Indominus rex will interact with Velociraptor by crouching down and growl to the Velociraptor.

To create the Indominus rex, the development team acquired the 3D model that was created for 2015's Jurassic World by Industrial Light & Magic, as well as audio files to make the most authentic representation of the hybrid.[4] To further differentiate it from other large carnivores, the development team gave Indominus rex the ability to kill large sauropods, as a reference to its film counterpart.

The Indominus was first showcased on Steam, 5 days before the game's release,[5] and it received a Species Profile a day after.[6] Up until Update 1.6, the coastal pattern of the Indominus used to be completely black, but it was later given stripes to make it fall in line with the other cosmetic patterns.

With the Secrets of Dr. Wu expansion pack, Indominus rex was given the ability to camouflage around trees using the new trait genes, thus making it even more film accurate. 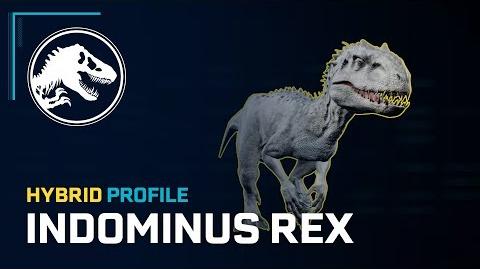 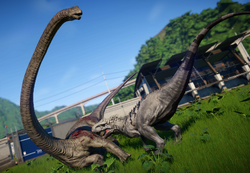 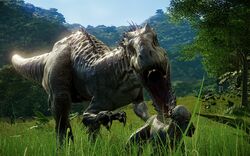