Giganotosaurus is a genus of carcharodontosaurid dinosaur in the Jurassic World Evolution series. One of the largest species of carnivorous dinosaur, Giganotosaurus originated in Late Cretaceous South America.

In Evolution, Giganotosaurus is unlocked in Campaign Mode upon completion of the Security Division mission on Isla Pena.

While InGen was not known to have cloned Giganotosaurus for either Jurassic Park or Jurassic World, by 2012, the company had possession of the carnivore's genetic material. This was later used, along with the DNA of numerous other species, to create the genetically modified superpredator known as the Indominus rex,[1] which was responsible for the destruction of Jurassic World in 2015.[2]

Giganotosaurus is a powerful and large predatory dinosaur, one of the largest in the park, with a distinctive long sloping face.

Giganotosaurus is more tolerant of others of its own kind, and in contrast to Tyrannosaurus, will happily live in pairs. Like other giant carnivores, it's a powerful animal and needs strong fences to contain it.

Giganotosaurus was originally discovered in 1993 by an amateur paleontologist, Reuben Carolini. The discovery was officially recorded by paleontologist Rodolfo Coria in 1995. A team led by Coria and funded by American Paleontologist Don Lessem uncovered roughly seventy percent of the animal. It was soon declared the largest theropod ever discovered, rivalling Tyrannosaurus in size, though Spinosaurus, a slightly larger theropod would soon be discovered and re-examined in the following years.

One of the largest terrestrial carnivorous dinosaurs ever discovered, Giganotosaurus is a member of the Carcharodontosauridae family, which evolved in the Late Jurassic and are related to genus such as Allosaurus. The family's earliest genus, Veterupristisaurus, evolved in Late Jurassic Tanzania and in the Early to Mid Cretaceous Carcharodontosaurids could be found in Africa, Europe, Asia and both North and South America. However, during the Late Cretaceous, they started dying out in Laurasia (the name for the ancient Northern Hemisphere), with the last Laurasian species, Shaochilong, being found in modern China. However, they thrived in the southern continents of Gondwana for a time, though little evidence of them is known by the Campanian stage of the Cretaceous, roughly 85 million years before present day. Other interesting species include the slightly smaller Carcharodontosaurus from northern Africa, the high-spine Acrocanthosaurus from North America, and the smaller, humpbacked Concavenator from Europe.

In packs, the Giganotosaurus could possibly have taken down larger sauropods. The bite of Giganotosaurus was weaker than Tyrannosaurus and instead, it would have relied on its sharp, serrated teeth to inflict deep, bleeding wounds to weaken prey instead of utilizing brute strength to bite through thick armor. This is because the prey Giganotosaurus targeted often lacked armor, but were very robust and densely muscled, meaning a crushing bite force would be ineffective and instead, multiple bites would be employed to cause death by blood loss and shock. This is common in many carnosaurs, such as Allosaurus. It also differentiates them from the Coelurosaurian Tyrannosaurs.

Giganotosaurus was discovered in the Candeleros Formation, which had a fluvial environment consisting of rivers and streams. There, it lived alongside many species of titanosaur, including some of the largest dinosaurs ever discovered such as Andesaurus, medium-sized sauropods like Limaysaurus, as well as large ornithopods and pterosaurs. 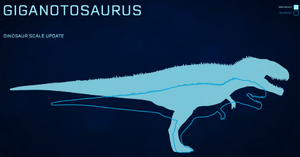 The scale of the Giganotosaurus dramatically increased in Update 1.4