Gallimimus was first bred by InGen for the original Jurassic Park on Isla Nublar. Based on an InGen report, the original herd of Gallimimus on Isla Nublar numbered 24 individuals, though by 1994, their numbers dropped dramatically to nine due to constant Tyrannosaurus attacks.[1]

On Isla Sorna, there was an original population count of twenty. However, it is unknown if and how this figure changed over time, due to the island being abandoned after Hurricane Clarissa hit the island. It is assumed that because of the frog DNA added to the Gallimimus genome, some animals changed sex and began breeding.[1]

After Jurassic World was completed in 2004, Gallimimus was exhibited in the Gallimimus Valley attraction, where tourists could take a safari ride through the valley among the Gallimimus. Guests could also interact with juvenile Gallimimus in the Gentle Giants Petting Zoo.[2] Three years later, Gallimimus were encountered during the eruption of Mount Sibo, which threatened it and the other species of resurrected dinosaur with extinction. Several Gallimimus were successfully transported to the mainland. These specimens were later released from their cages alongside numerous other species of dinosaurs, into the wilds of northern California.[3]

The largest ornithomimid in Jurassic World, base genome of Gallimimus has is primarily orange, with darker brown stripes running down its head, neck, and back.

Gallimimus is an excellent and versatile dinosaur for small and large herbivore enclosures. They have a fairly long lifespan and excellent immunity against diseases. Their minimum exhibit space requirement is rather low and they're inexpensive to incubate. Like other Ornithomimidae, Gallimimus is a herding animal, and can live with up to eighteen other Gallimimus, as well as twenty three other dinosaurs of varying species. With the Claire's Sanctuary expansion pack, Gallimimus display a preference for Palms, with a secondary preference for Horsetails and Grasses. Conversely, they are harmed when they consume Paw Paw, Mosses and Cycads.

Gallimimus is one of the largest, if not, the largest and best understood of the Ornithomimidae family. Like other genera such as Struthiomimus, it had long legs, a long neck, and a toothless beak. The diet of this family of dinosaurs has always been a point of debate, but from stomach contents containing gastrolith stones and wear and tear on beaks suggest that Gallimimus was mostly herbivorous. Gallimimus also had a wide field of vision, which was useful for spotting predators such as Tarbosaurus or packs of Zanabazar.

Mongolia at this time was rich with a myriad of dinosaur genus, including other theropods such as the fearsome Tyrannosaurids Tarbosaurus and Alioramus, the Dromaeosaurid Adasaurus, the enormous basal Ornithomimosaur Deinocheirus, a wide variety of Oviraptorosaurids such as Avimimus and Conchoraptor, as well as the mysterious theropod Therizinosaurus. Alongside these were more conventional dinosaurs; the hadrosaur Saurolophus, the Pachycephalosaurids Homalocephale and Prenocephale, the Ankylosaurids Saichania and Tarchia, as well as the sauropods Nemegtosaurus and Opisthocoelicaudia. 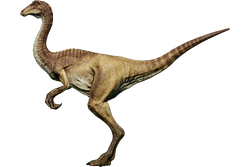 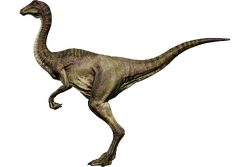 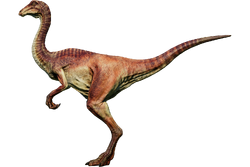 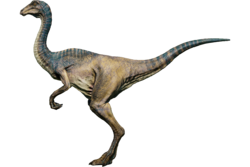 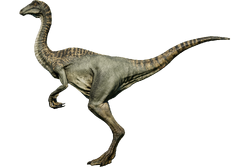 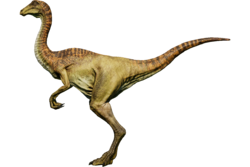 To create the Gallimimus, the development team acquired the 3D model that was created for the Jurassic World films by Industrial Light & Magic, to create the most authentic representation of the dinosaur.[4] It was officially revealed in a Species Profile on March 2, 2018.[5] 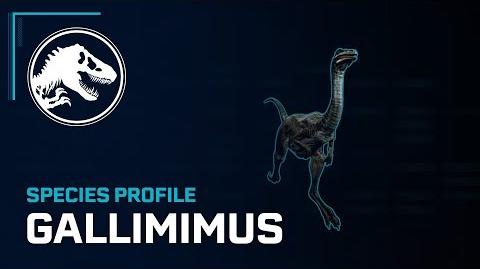