A Fence is a structure used to contain dinosaurs in Jurassic World Evolution. The Light Steel fence is automatically unlocked at the start of the game with subsequent fences being unlocked on Isla Matanceros, Isla Muerta, and Isla Pena respectively.

There are three types of fencing; each with an electrified and non-electrified option, as well as a gate. Although guests can see through fences, only through buildings such as the Viewing Platform and Viewing Gallery can Dinosaur Visibility be increased.

Dinosaurs that are Agitated will attempt to attack fences and all fences will take a certain number of hits before an attacking dinosaur breaks through them. Ranger Teams can repair damaged or destroyed fences while ACU Helicopters can be used to re-contain escaped dinosaurs. Tornadoes can also destroy fences. 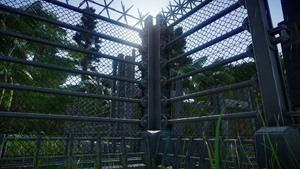 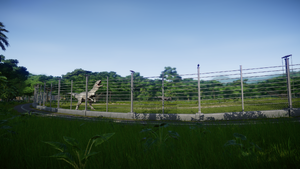 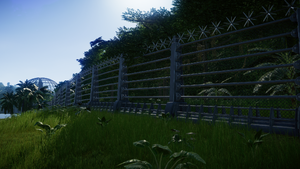 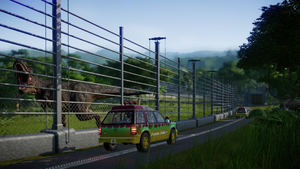 Retrieved from "https://jurassicworld-evolution.fandom.com/wiki/Fence?oldid=36539"
Community content is available under CC-BY-SA unless otherwise noted.