A Feeder is an enclosure device that is used to feed dinosaurs in Jurassic World Evolution. All feeder types are automatically unlocked at the start of the game aside from the Ground & Tall Paleofeeder, and the Extended Feeders which are unlocked through the Greenhouse and on Isla Sorna respectively.

A Feeder is the primary means through which dinosaurs are fed, and each of the ten feeder types contain food that services a specific dinosaur dietary need. The Live Bait and Fish feeders provide carnivorous dinosaurs with live prey in the form of goats and fish, while the Carnivore Feeder and all Herbivore Feeders provide dinosaurs with stationary but easily accessed dietary options.

Each feeder has a set number of food reserves that must be replenished over time by a Jeep from the Ranger Station. It is also possible to manually adjust the rate at which feeders dispense their reserves meaning players must achieve a balance between dispensing reserves in an economical way while also ensuring dinosaurs are kept well fed.

The Extended feeders were added to the game in Update 1.5, while Fish Feeders were added with Update 1.8. The Paleofeeders, which facilitate paleobotany, were included with the Claire's Sanctuary DLC in June 2019. 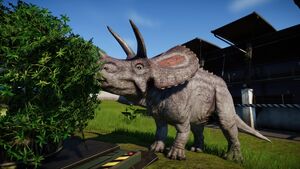 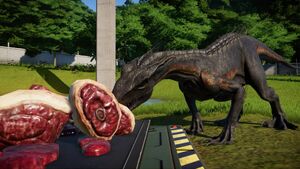 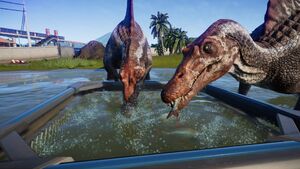 
Retrieved from "https://jurassicworld-evolution.fandom.com/wiki/Feeder?oldid=33816"
Community content is available under CC-BY-SA unless otherwise noted.