Edmontosaurus is a genus of hadrosaurid dinosaur in the Jurassic World Evolution series. Among the largest hadrosaurs, Edmontosaurus originated in Late Cretaceous North America.

In Evolution, Edmontosaurus is equally at home alone or in herds, and is one of the first dinosaurs available to the Hammond Foundation on Isla Matanceros.

Edmontosaurus was first cloned by InGen during the planning stages for Jurassic Park on Isla Nublar, with a small herd of four individuals bred on Isla Sorna, per a 1996 report.[1] These animals were not shipped to Nublar prior to the incident in 1993, and InGen subsequently lost track of the animal's population numbers on Sorna, though the carcass of an Edmontosaurus was seen in a Tyrannosaurus nest prior to the San Diego Incident in 1997.[1][2]

A herd of Edmontosaurus were later exhibited in Jurassic World on Isla Nublar, where they lived in Gallimimus Valley, though it is unknown if these individuals were shipped from Isla Sorna, or were bred by Masrani. After the park’s abandonment due to the escape of the Indominus rex in 2015, it was reported that Edmontosaurus had slipped back into extinction.[3]

The largest hadrosaur cloned by Hammond Foundation, Edmontosaurus is a herbivorous gentle giant that tends to move in herds, much like the other hadrosaurs Parasaurolophus and Tsintaosaurus. The duckbill dinosaur sports a teal blue head with yellow highlights and an orange body. Based on recent palaeontological findings, Edmontosaurus has a small crest on its head.

Edmontosaurus is defenseless against most carnivores, with low attack and defense ratings. A moderately large exhibit will be needed for a herd of Edmontosaurus and even larger for mixing with other dinosaurs. Hadrosaurs are standard herbivores for many community or themed exhibits, as they are relatively long-lived, are cheap to incubate, and have good resistance against diseases.

Edmontosaurus is a social animal that prefers living in herds. It can, however, live happily on its own. It mixes well with other herbivorous dinosaurs but can cause chaos if let out of their enclosure, bowling over or trampling park guests when running. While they are content with solitude, Edmontosaurus can tolerate with up to fifteen other Edmontosaurs and twenty-five dinosaurs of varying species. It feeds from Ground Herbivore Feeders, and, with the Claire's Sanctuary expansion pack, Edmontosaurus benefits from Palms in a Ground Paleofeeder, with a secondary preference for Conifers, Rotten Wood and Ginkgo.

Among the largest members of the hadrosaur family, Edmontosaurus was one of the last non-avian dinosaurs, living between 73-65 million years ago. It was a member of the Saurolophine hadrosaurs, which lacked the complex hollow crests of lambeosaurs like Parasaurolophus. Edmontosaurus instead had a fleshy comb similar to the comb of a rooster.

The Edmontosaurus in Jurassic World Evolution is based on the species Edmontosaurus regalis, which has been found in the Horseshoe Canyon Formation in Alberta, Canada. This species had a solid circular shaped crest on its head. The other species, Edmontosaurus annectens, lacked this crest and evolved later than E. regalis.

The Edmontosaurus lived in a humid and subtropical climate, with conifers and ferns thriving in the swamps and live oak and shrubs in the forests. It shared its environment with a variety of dinosaurs such as the ceratopsians Triceratops, Torosaurus, and Pachyrhinosaurus, the pachycephalosaurs Pachycephalosaurus, Stygimoloch, and Dracorex, the armoured Ankylosaurus and Edmontonia, the tyrannosaurs Albertosaurus, Gorgosaurus, and Tyrannosaurus, the small theropod Troodon, and the small ornithopod Thescelosaurus.

Edmontosaurus is one of the species that, despite being canon, has not appeared in any of the Jurassic films yet. So instead, the development team took inspiration from the design that is used in the promotional websites for Jurassic World, created by the renowned paleoartist Julius T. Csotonyi.[4] The crest was added later to accommodate recent fossil finds.

The Edmontosaurus was first revealed to be in the game in an IGN first video,[5] and later received a Species Profile a few months later.[6] 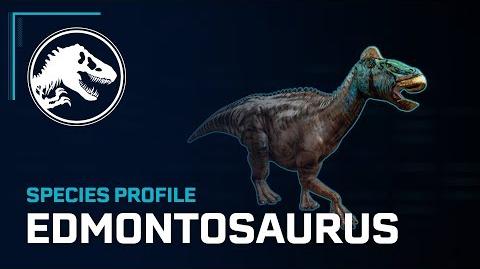 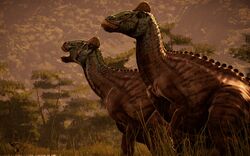