Dinosaurs are the main focus of the Jurassic World Evolution series. Having lived for hundreds of millions of years during the Mesozoic Era, dinosaurs are an incredibly diverse group, ranging from modern birds, to species such as Tyrannosaurus, Brachiosaurus and Velociraptor, brought back from extinction by InGen and the Hammond Foundation.

In Jurassic World Evolution, players are tasked with populating and ensuring the success of their dinosaur parks and protecting guests in the process. The game launched with thirty seven unique species, with five additional species added in the Deluxe Dinosaur Pack simultaneously to release.

The paid Expansion Packs Secrets of Dr. Wu, Claire's Sanctuary and Return to Jurassic Park, as well as the Cretaceous, Carnivore and Herbivore Dinosaur Packs expanded the roster of species as have the free Update 1.3 and Update 1.9.

The process of creating a dinosaur begins by sending out dig teams through the Expedition Center to dig sites across the world to recover dinosaur fossils. Recovered fossils are taken to the Fossil Center where players are given the option of extracting DNA or selling the fossils. Once 50% of a dinosaur's DNA has been extracted, it can be incubated and released into the park via the Hammond Creation Lab. Prior to the start of incubation, it is possible to modify a dinosaur's cosmetic and trait genes.

Dinosaurs have a variety of species specific needs which must be satisfied in order to ensure their health and comfort are maintained. In addition to basic food and water needs, different types of dinosaurs can variate greatly in terms of preferred habitat, enclosure size and whether they tolerate other dinosaurs co-existing alongside them. For example, an Ankylosaurus will only tolerate a social group of 4 of its own species and 8 total dinosaurs in its population group before it will become agitated. Ankylosaurus is also only capable of living alongside other herbivores without engaging in either a death duel or territorial fight that is otherwise inevitable if one is enclosed with carnivores. These specific requirements associated with Ankylosaurus differentiate it from the requirements of a dinosaur such as Tyrannosaurus which can only tolerate a social group containing itself but otherwise can live alongside 15 total members of different species that it will interact with in different ways depending on their type.

Dinosaur Behavior is the way in which dinosaurs act and interact by themselves, towards other dinosaurs, and towards the environment, with each type of dinosaur having a series of potential actions that define its behavior. Specific and General behavior statuses are shown through an indicator located at the top of their status bar and are often directly correlated with dinosaur requirements. Alphas and Social Groups were added with Update 1.5.

Although non-avian dinosaurs went extinct at the end of the Cretaceous period, 66 million years ago, InGen successfully began cloning dinosaurs in the late 1980s to be displayed in Jurassic Park on Isla Nublar.[2] After the 1993 Isla Nublar incident[3], the dinosaurs on both Isla Nublar and Isla Sorna were abandoned to the wild. In 1998, however, Masrani Global would acquire InGen and begin development of Jurassic World, recapturing Nublar's wild dinosaur population. Following the collapse of Isla Sorna's ecosystem, its surviving dinosaurs were relocated to Nublar where they were would also be displayed in Jurassic World once it opened to the public in 2005.[2]

After the abandonment of Jurassic World in the wake of the 2015 Isla Nublar incident[4] , the surviving dinosaurs on Isla Nublar were once again abandoned and would soon became threatened with extinction by the impending eruption of the island's now-active volcano, Mt. Sibo.[5] Many dinosaurs would be rescued from extinction on Isla Nublar where they were then taken to the mainland to be sold in a black market auction at the Lockwood Manor. While some were successfully bought by the highest bidders, others were released into the wild by Maisie Lockwood.[6] As a result, cloning technology was proliferated across the world, no longer contained to InGen's previously held monopoly.

Troodon, available in the Secrets of Dr. Wu DLC 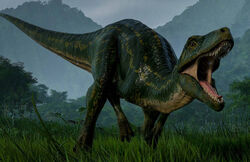 Dryosaurus and Homalocephale, available in the Herbivore Dinosaur Pack DLC

Compsognathus, available in the Return to Jurassic Park DLC