Dilophosaurus is a genus of theropod dinosaur in the Jurassic World Evolution series, originating in Early Jurassic North America.

One of the earliest species of sizeable theropod carnivores and recognized by the two crests on its head, Dilophosaurus was nonetheless small in comparison to many of its later relatives. However, it did not lack for ferocity and possesses the ability to spit venom at its prey, causing blindness and paralysis.[1]

In Evolution, Dilophosaurus is first unlocked by the Hammond Foundation on Isla Muerta, and plays a key role in a Security Division mission on the island, as part of an ongoing project by Dr. Henry Wu and George Lambert.

Originating in the Jurassic period, a total of seventeen Dilophosaurs were bred by InGen, with five present on Isla Nublar and twelve on Isla Sorna.[2] During the Jurassic Park incident in 1993, a Dilophosaurus attacked park employee Dennis Nedry after his car crashed close to the creature's paddock, using its venom to subdue and kill him.[1] A year after the incident, it was reported during a cleanup operation on Nublar that the population of Dilophosaurs had remained constant.[2]

Dilophosaurus was one of a large number of dinosaurs exhibited in Jurassic Park's successor, Jurassic World, which opened on Isla Nublar in 2004. Like the other animals in the park, Jurassic World's Dilophosaurus underwent frequent medical care, with a noted problem being a fungal infection which frequently appeared on the animal's decorative frill. After the eruption of Mount Sibo in 2018, it is unknown if there are any surviving populations.[3]

The base genome of the Dilophosaurus is primarily dark green, with red, yellow and white stripes adorning various parts of the body. As large as a modern brown bear, the most distinctive features of the Dilophosaurus cloned by InGen are their two-crested heads, and a multi-colored frill, which extends itself when the animal is attacking, usually by spitting venom at its prey.[4]

Dilophosaurus is one of the less expensive carnivores. It is a gregarious carnivore and can live either alone or in packs of up to twelve individuals. They are resistant to bracken poisoning and have relatively long lifespans. They will fight with Velociraptor and other small carnivores, but can live alongside large carnivores.

Dilophosaurus lived in what is now Arizona in the Kayenta Formation. At around 20 feet long, it was a medium-sized dinosaur compared to many later theropods, but during the Early Jurassic, it was the largest predator on land. Like many primitive theropods it had eyes on either side of its head, and so could not see directly ahead. It was believed to be a part of a family called Dilophosauridae, a group of early carnivores identified by their elaborate crests that acted as display features for attracting mates, including Sinosaurus from China, Dracovenator from South Africa, and Cryolophosaurus from Antarctica. However, the genus was redescribed in 2020 and found not to be particularly closely related to any of these dinosaurs, making Dilophosauridae invalid. This redescription also found that it was a far more powerful predator than had been previously thought, and that its two bony crests may have been the core of a much larger ornamental structure.

For many decades the known material of Dilophosaurus painted a picture of a very delicate animal that couldn't take on large prey, which led researchers to suggest that it only ate small animals or scavenged the kills of more capable predators. It was later hypothesized to have been a fish-eater based on the notch at the end of its jaw (a feature common in piscivorous archosaurs like phytosaurs and spinosaurs), its long arms and claws, and its fluvial habitat. Studies on caloric intake and probable diet based on dentition suggest Dilophosaurus was a generalist carnivore, and the aforementioned 2020 study shows that it would have been more than capable of taking on big game (though the possibility of at least occasional piscivory was not ruled out).

Unlike the Jurassic Park canon, the real Dilophosaurus almost certainly didn't have an extendable frill or the ability to spit poison as no living ancestor or relative of birds, crocodiles, or dinosaurs possesses such features. The real-world animal was also far larger at over twice the length and almost twice the height of the in-game creatures. It also didn't live in Asia (this probably comes from a mixup with Sinosaurus, a similar but unrelated large crested theropod). However, its portrayal as a social animal might be accurate due to multiple individuals being found together alongside a trackway of criss-crossing footprints and the possible use of the crests for display and social signaling.

Dilophosaurus is known from the Kayenta Formation, which was primarily deposited by rivers. There, it lived alongside prosauropods and the armoured Scutellosaurus, as well as an Early Jurassic species of Coelophysis (which coincidentally also bore head crests), once one of the most abundant predators in the Late Triassic.

The design of the Dilophosaurus in Evolution is based on its appearance in 1993's Jurassic Park. Unlike the film version, the Dilophosaurus in Evolution supports a visible frill resting along the neck instead of being hidden. The audio files used in the film were provided by Universal Pictures, in order to help the development team create the most authentic representation of the dinosaur.[5] It was officially revealed in a Species Profile on 4 May 2018.[4] 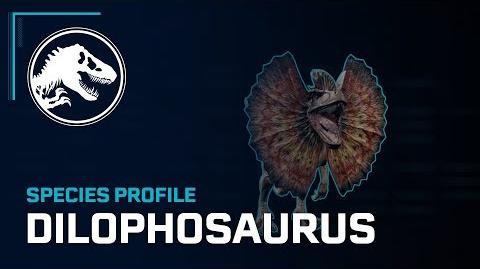