Deinonychus is a genus of dromaeosaurid dinosaur that originated from Early Cretaceous North America. A close relative of Velociraptor and one of the best-known dromaeosaurid species, the Deinonychus bred by InGen can be distinguished by their head crest and distinctive coloration. Deinonychus are unlocked by the Hammond Foundation on Isla Tacaño.

Despite their similarities, Deinonychus and Velociraptor cannot coexist and will fight each other. In fact, the genus seems antagonistic toward one another and will hunt down the other. Who is the victor in the battle can vary, though unmodified the Velociraptor has slightly higher base stats and may have an advantage. However, Deinonychus can reap a higher benefit from some genome splices meaning a heavily modified Deinonychus will be exponentially more dangerous than the base creature.

Like Velociraptor, Deinonychus are social and will rapidly lose comfort and turn antagonistic if denied a pack. A bare minimum pack of 3 individuals per paddock can reduce rampages, though a pack of 4 to 6 is recommended. If given space and numbers, Deinonychus can be considered a more docile alternative to Velociraptor.

In reality, like other dromaeosaurids, Deinonychus would have been covered in feathers safe for avian scales present on the feet and the end of the snout. Fossils of relatives such as Microraptor and analysis of quill knobs found on Dakotaraptor, Utahraptor, and Velociraptor indicate it would have had short feathers across most of its body with larger feathers forming a tail fan and small wings on its arms. This would have made Deinonychus resemble a flightless eagle in real life.

It is thought these wings and the tail fan would have assisted Deinonychus in maneuvering as airfoils, potentially gliding when it was young, as well as aid in visual displays and brooding its nests. Studies on the feet and hands of Deinonychus support the notion that the genus was a fairly good climber, especially when younger and lighter. In terms of build in real life, Deinonychus had a longer, pointer skull, and longer arms than what is seen in-game. Deinonychus has been found in both the Cedar Mountain and Cloverly Formations.

A relatively medium-sized dromaeosaurid, it was one of the earliest of its family, yet showed advanced features that would be passed on to later theropods of the Coelurosauria line; such as a stiffened tail to keep the dinosaur steady while running and stereoscopic vision so it could gauge distances. Deinonychus was somewhere in the middle of the food chain.

Previously; it was thought that these theropods have lived in packs, in additon, prey items would likely depend on if it was hunting alone or in a group. Alone it would have targeted prey similar in size to itself or smaller, but in groups, it could have mobbed prey such as Tenontosaurus, Aquilops, and Zephryosaurus, but avoided large sauropods such as Astrodon and Sauroposeidon. However, a recent publishment has re-established the thesis that dromaeosaurids, especially Deinonychus, could have had a more solitary lifestyle, and did not form packs. [4]

Deinonychus is known to have inhabited a floodplain or swamplike habitat as Cloverly Formation and the Antlers Formation consisted of tropical or sub-tropical forests, deltas and lagoons. Other animals Deinonychus lived alongside include herbivorous dinosaurs such as the armored Sauropelta, as well as the ornithopods Zephyrosaurus and Tenontosaurus.

In the Antlers Formation, Deinonychus shared its environment with the large theropod Acrocanthosaurus, the huge sauropod Sauroposeidon, as well as the crocodilians Goniopholis and Paluxysuchus. 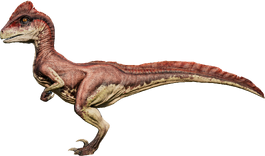 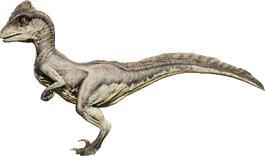 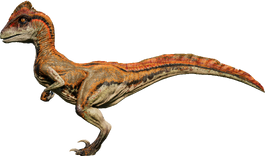 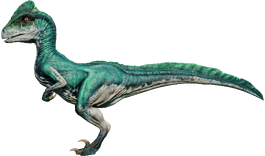 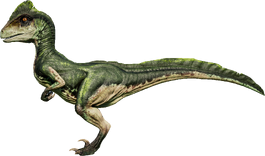 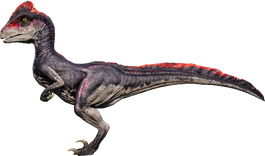