Related to the Dilophosaurus, Cryolophosaurus was among the largest carnivores of its time, measuring about seven meters in length and weighing an average of a half ton.[1] The name Cryolophosaurus means "frozen crested lizard", which refers to its Antarctic origins, as well as its most distinctive feature; the "pompadour"-like head crest, which earned it the nickname "Elvisaurus".[1]

In Evolution 2, the Cryolophosaurus prefers enclosures with both forested and open areas, along with a sizable water source and access to prey. They are not particularly social, and can comfortably live in an enclosure with two individuals.[1]

Although Antarctica is one of the coldest places on earth nowadays, during Cryolophosaurus existence - during the Early Jurassic period, around 170 million years ago, it had a cool climate that rarely reaches freezing temperatures. Cryolophosaurus lived alongside only one other known genus of dinosaur, the sauropodomorph Glacialisaurus, although other reptiles and mammals shared the same environment.

Cryolophosaurus was first revealed to be in Evolution 2 with the release of its Species Field Guide on November 3, 2021. This was accompanied by a short article exploring the species on the official Frontier forums.[1] 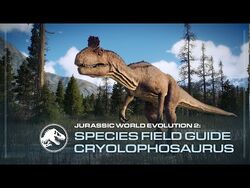