In Evolution, Crichtonsaurus is featured in the Deluxe Dinosaur Pack, and can be unlocked in the Campaign Mode by progressing through the Science Division on Isla Matanceros, and becomes available through the Research Centre.

Crichtonsaurus is a small species of ankylosaurid dinosaur related to the larger Ankylosaurus. It is similar in appearance to its larger cousin, with large osteoderms covering its back, and a club at the end of its tail to ward off predators. The base genome of the Crichtonsaurus has a brown-grey colouration.

Crichtonsaurus is one of the more social ankylosaurid dinosaurs, and can comfortably live in a social group of up to five other members of its kind, and in a mixed species exhibit of up to eight other dinosaurs of various species. Crichtonsaurus requires a relatively small exhibit, and is therefore quite easily contained. Like other armoured dinosaurs, Crictonsaurus will defend itself from medium and large carnivores, but can be housed peacefully with small predators.

With the addition of palaeobotany in the Claire's Sanctuary expansion pack, Crictonsaurus have a primary preference for Horsetails, a secondary preference for Paw Paw and Mosses, and will become harmed if they consume Tree Ferns, Conifers or Ginkgo.

Although now regarded as a dubious genus, Crichtonsaurus was named to honour Michael Crichton, the author of Jurassic Park and its sequel, The Lost World. The fossils found so far are rather scant, consisting of a jaw and teeth, a skull and pieces of backbone and armour. There is little to tell from these remains and there has been much confusion due to two other species found in the same formation, the Sunjiawan Formation. All that can be said so far is that it is a primitive ankylosaurid. It is sometimes regarded as a synonym of the similar genus Crichtonpelta. 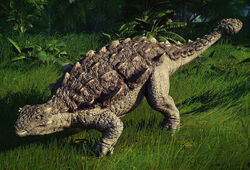