Corythosaurus is a genus of hadrosaurid dinosaur in the Jurassic World Evolution series. Distinguished from other hadrosaurs by its rounded head crest, Corythosaurus originated from Late Cretaceous North America.

In Evolution, Corythosaurus fossils are first unlocked in Campaign Mode on Isla Muerta and can be excavated from the Dinosaur Park Formation, Horseshoe Canyon Formation, Lance Formation, and Scollard Formation.

Corythosaurus was planned for the original Jurassic Park on Isla Nublar, with 97% of its genome having been mapped prior to the 1993 incident.[1]

Following the San Diego Incident in 1997,[2] and the subsequent passage of the Gene Guard Act, InGen, now owned by Masrani Global, conducted illegal experiments on Isla Sorna, resulting in the recreation of Corythosaurus, as well as Ankylosaurus, Ceratosaurus, and Spinosaurus.[1]

Corythosaurus is a similar in size and look to other hadrosaurs such as Parasaurolophus, differentiated by its distinct rounded crest. Its base cosmetic gene is a mixture of yellows and browns with a streak running down its side, diving its color scheme in half. Corythosaurus has requirements similar to that of other Isla Muerta unlocks, being slightly more difficult to manage than the preceding island's hadrosaur unlock, Edmontosaurus.

Corythosaurus behave similarly to other species of hadrosaur. Like others of its family, it prefers a moderately large enclosure but otherwise has modest social needs. It is the first hadrosaur with a social requirement that requires multiple of its own species to maintain its comfort level but otherwise has a high population limit. Like all other hadrosaurs, Corythosaurus is vulnerable to predation from most carnivores. This means that its sole defense against predators is to avoid them.

Corythosaurus was discovered in 1911 by Barnum Brown in Red Deer River, Alberta, Canada.

As part of the lambeosaurine branch of hadrosaurs, it possessed a distinctive crest. This crest is semi-circular in shape and gave the dinosaur its name, Corythosaurus, meaning 'Helmet Lizard', as the crest resembles a helmet from Corinth, a city in Ancient Greece. Like many other lambeosaurine crests, it was hollow and filled with air chambers used for both communication and display. Some specimens of the dinosaur are well preserved enough that soft tissue has been discovered, such as skin impressions, and webbing between its hoof like toes and ear canals.

Corythosaurus lived alongside a myriad of other dinosaurs such as the hadrosaurus Parasaurolophus, the ceratopsians Chasmosaurus, Pentaceratops, and Centrosaurus, the ornithomimid Struthiomimus, the armoured Euoplocephalus and Edmontonia, as well as the tyrannosaurids Daspletosaurus and Albertosaurus.

The design of the Corythosaurus in Evolution is based on its appearance in 2001's Jurassic Park III. The only difference being the slightly muted colors compared to the movie species. It was revealed to be in the game when it received a Species Profile on May 18, 2018.[6] 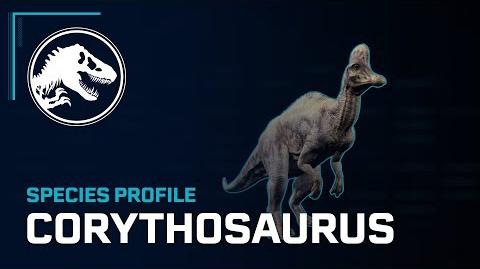