Coelophysis is a genus of theropod dinosaur in Evolution 2, originating in Late Triassic Africa and North America.

One of the earliest theropods, Coelophysis lived between 190 and 225 million years ago in what would become Africa and North America. Measuring two metres in length and weighing between 18 and 23 kilograms, it was a slender and agile predator.[1]

Coelophysis are a relatively calm species of dinosaur, and with access to wide open spaces, water, a small amount of forest and a pack of their own kind, they can thrive within their enclosure.[1] Due to their relatively small size, Coelophysis are vulnerable to predatory dinosaurs, though can cohabitate with larger herbivorous species they are too small to hunt. Though they are a social species which prefer living in groups, they do not engage in pack hunting.[1]

The name Coelophysis originates from Greek, meaning "hollow form", in reference to the animal's hollow limbs. Originating in the Late Triassic period, a time when dinosaurs were not yet at the top of the food chain, Coelophysis would likely have used its agility to avoid larger predators and swiftly catch their prey.[1]

Coelophysis was one of the first dinosaurs confirmed to be in Evolution 2, appearing in the game's announcement trailer on June 11th, 2021. It later received a Species Field Guide on June 25th, 2021, as well as a short article exploring the species on the official Frontier forums.[1] 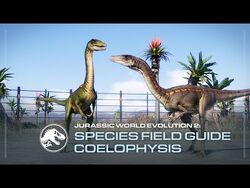