Chasmosaurus is a genus of ceratopsid dinosaur in the Jurassic World Evolution series, originating from Late Cretaceous North America. In Evolution, Chasmosaurus fossils are first unlocked on Isla Pena then excavated in the Dinosaur Park Formation, Horseshoe Canyon Formation, and Scollard Formation.

In Jurassic World Evolution, the base genome of the Chasmosaurus is primarily reddish-brown in color, with a creamy underbelly and faded blue and red streaks on its large frill. As with other ceratopsians, it primarily moves in herds to afford it protection against carnivores. An average sized ceratopsian, Chasmosaurus is similar in size to its relatives, Triceratops and Sinoceratops. Chasmosaurus has a condensed body type, a large rectangular frill, and three horns; one on its snout and two above its eyes. Unlocked on Isla Pena, Chasmosaurus has average requirements and is otherwise relatively easy to take care of.

Chasmosaurus is a somewhat social animal and requires at least two more of its own kind to maintain a healthy comfort level but otherwise has an average maximum social and population limit. Additionally, Chasmosaurus is capable of living somewhat peacefully alongside small carnivores such as Proceratosaurus and Velociraptor, only occasionally engaging in non-fatal territorial fights.

Chasmosaurus was first discovered in 1898 by Lawrence Lambe in California, USA, with a more comprehensive specimen being discovered in 1913 by Charles Sternbern in Alberta, Canada.

Chasmosaurus' branch of ceratopsians, the Chasmosaurinae, are characterized by their long frills and small horns. The massive frills were most likely not used for combat, as they were too fragile and contained large openings in their skeletal structure, likely to reduce their weight. One theory suggests that they may have been able to flush blood into their frills to display vivid colors to attract mates or scare off rivals and predators.

Chasmosaurus lived alongside other dinosaurs such as the hadrosaurs Parasaurolophus and Corythosaurus, the ceratopsians Centrosaurus and Pentaceratops, the ornithomimid Struthiomimus, the armored Euoplocephalus and Edmontonia, as well as the tyrannosaurid Daspletosaurus. It ate cycads, ferns, and palms, but there were probably many more considering that it lived in a wooded region.

The Chasmosaurus is one of several ceratopsian dinosaurs featured in Jurassic World Evolution, and was first revealed in a Species Profile on February 23, 2018.[1] It plays a role in the Isla Pena Science Division mission Needs Management, in which the player must acquire at least 85% of its genome and release two into a secure enclosure. 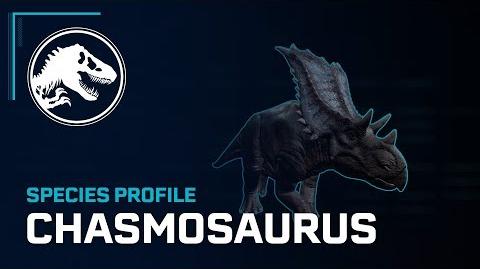