Ceratosaurus is a genus of theropod dinosaur in the Jurassic World Evolution series. Distinguished by a bladed horn on its snout, Ceratosaurus originated from Late Jurassic North America, Africa, and Europe.

In Evolution, Ceratosaurus is the first large carnivore available in the Campaign Mode on Isla Matanceros.

Ceratosaurus was one of the animals illegally cloned by InGen on Isla Sorna in 1999, soon after the company had been acquired by Masrani Global.[1] After InGen abandoned the cloning facility on Sorna, the Ceratosaurus was released into the wilds of the island, where it was briefly encountered by the survivors of a plane crash on the island in 2001.[2] The existence of the Ceratosaurus, which was absent on InGen's list, was later reported to the authorities, as with the presence of Corythosaurus, Ankylosaurus, and a Spinosaurus, though these reports were later covered up.[1]

Several Ceratosaurus were present on Isla Nublar around the time of the incident in 2015, and were encountered by the survivors of Camp Cretaceous; Jurassic World's resident summer camp.[3] As of 2018, it has been revealed that the Ceratosaurus population was the victim of an unconfirmed form of cruelty, likely referring to the aforementioned 1999 illegal cloning event.[4]

The base genome of Ceratosaurus has a red head, neck, and upper back, and a creamy body with dark black stripes. It has a large number of osteoderms, a horn on its snout, and a smaller horn above each eye.

Ceratosaurus is an aggressive and voracious predator, that targets mainly smaller herbivores but can also tackle larger herbivores, including Triceratops. They can either be housed alone, in pairs or in a group of three. They can also be housed safely with almost all sauropods, except Nigersaurus.

Ceratosaurus remains have been found in North America and Portugal. While specimens have been reported from Tanzania, Uruguay, and Switzerland, most scientists doubt their assistant to this genus. In the Morrison Formation, it is one of the rarer theropods, being overshadowed by the more common Allosaurus. An interesting feature of Ceratosaurus are the lines of osteoderms, raised bony growths, down its back which are similar to a crocodile. These act as a type of armor, which suggests that Ceratosaurus competed with and even fought with larger carnivores such as Torvosaurus and Allosaurus. It can be deduced that Ceratosaurus was in the middle of the food chain or lived in a different area to these other predators. Its primary prey was small to medium ornithopod dinosaurs such as Dryosaurus, Camptosaurus or Othnielosaurus. There are some species of Ceratosaurus that have been estimated to be as big as some Allosaurus. However, there aren't enough bones to show how big the species actually got.

Ceratosaurus most famous feature is its three horns, one on its snout and two above its eyes. Originally it was believed to have been a dangerous weapon used to attack herbivores or rivals. In recent studies, it has been concluded that the horns were too blunt and fragile to be used as weapons and were more likely a display feature that helped it attract mates. Its four-fingered arms were short but strangely muscular and its fangs were some of longest in comparison to its skull with them going past its bottom jaw on some specimens which probably means its jaw could open incredibly wide to swallow food. It could possibly have used these fangs to rip out the jugular of larger prey. Ceratosaurus tail was very flexible and helped it swim which may point to it supplementing its diet with aquatic prey.

All North American Ceratosaurus finds come from the Morrison Formation which had a semiarid environment with distinct wet and dry seasons. It housed a variety of different sauropods like Apatosaurus, Brontosaurus, Brachiosaurus, Camarasaurus, and Diplodocus. Other dinosaurs known from the Morrison Formation include theropods Allosaurus and Torvosaurus, as well as herbivores such as Dryosaurus and Stegosaurus.

A partial Ceratosaurus specimen indicates the presence of the genus in the Lourinhã Formation. Besides Ceratosaurus, Allosaurus and Torvosaurus were known to have lived in the area. Herbivorous dinosaurs from the formation include the sauropods Dinheirosaurus and Zby, as well as the stegosaur Miragaia.

The design of the Ceratosaurus in Jurassic World Evolution is based on the dinosaur's brief appearance in 2001's Jurassic Park III. Much like their work on the Mamenchisaurus, the development team took some liberties with the movie design of the Ceratosaurus, and redesigned some areas of the animal to be more scientifically accurate, such as the narrower, longer skull. Its inclusion in the game was first revealed on December 23, 2017, in an IGN First video that showcased some of the new species.[5] It received a Species Profile a month later, on January 26, 2018.[6]

Post-launch, in response to community feedback regarding inaccurate dinosaur sizes, the Ceratosaurus was downsized in Update 1.4 from 9.6 metres to 9 metres.[7] The Jungle cosmetic skin was added to the game with Update 1.6 on December 13th, 2018. 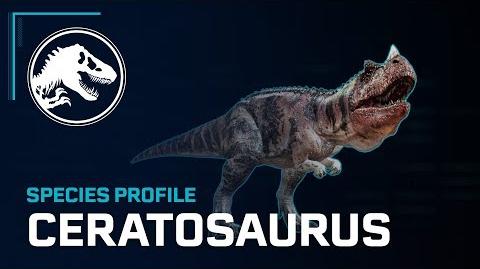