Carnotaurus is a genus of abelisaurid dinosaur in the Jurassic World Evolution series, which originated from Late Cretaceous South America. Carnotaurus was bred for the original Jurassic Park on Isla Nublar; two specimens were present on Isla Sorna during the 1990s and more were later exhibited at Jurassic World and encountered during the eruption of Mount Sibo in 2018.

In Evolution, Carnotaurus was first added to game with the Fallen Kingdom Dinosaur Update. The species becomes available to Jurassic World operations on the Five Deaths by achieving a high level of reputation with the Science Division on Isla Pena and subsequently becomes available to excavate at the La Colonia Formation in Argentina.

One of the most distinctive species of theropod dinosaurs, Carnotaurus was first cloned by InGen during the creation of Jurassic Park on Isla Nublar, with the company possessing a pair of Carnotaurus on Isla Sorna in the 1990s.[1] While these animals weren't encountered during the incidents on Sorna in 1997 and 2001, the species itself was eventually exhibited in Jurassic World on Isla Nublar,[2] which opened in 2004. It is unknown if these Carnotaurus were transported from Isla Sorna once the island's biosphere began to collapse.[1]

Carnotaurus was one of many species used to create the fearsome genetically modified hybrid known as Indominus rex,[3] which rampaged through Jurassic World in 2015.[4] During the incident, a lone Carnotaurus, nicknamed "Toro", was encountered numerous times by the survivors of Camp Cretaceous; Jurassic World's resident summer camp.[2]

Three years later, a Carnotaurus was encountered by Claire Dearing's group, which had been sent to Isla Nublar to save the dinosaurs from the impending eruption of Mount Sibo. While one of the Carnotaurus was killed by Isla Nublar's T. rex, at least two individuals were successfully transported to the mainland.[5] The two Carnotaurus were subsequently released into the wilds of northern California along with all the other dinosaurs.[5]

Four years after the incident at Lockwood Manor, an adult Carnotaurus and two juvenile Carnotaurus were present in the illegal Amber Clave Market of Valletta, Malta. The adult was eventually freed from its cage and roamed the streets of Valletta alongside an adult Allosaurus.[6]

Perhaps one of the world's best-known dinosaurs, Carnotaurus is an Abelisaurid that lived in what is now Argentina during the Late Cretaceous period. Named for its predatory nature and bull-like horns, it has a short and narrow head with two horns over the eyes. The arms of Carnotaurus are some of the shortest compared to body size in any theropod, this is a trait all Abelisaurids share, but Carnotaurus took to an extreme. The base genome of Carnotaurus is red, with black splotches covering the body.

Carnotaurus can live in pairs, and tolerate up to twenty other dinosaurs in its enclosure of various species. Like other similarly sized carnivores, such as Albertosaurus and Baryonyx, Carnotaurus are able to hunt small and medium-sized herbivores, and engage in death duels with ceratopsians, ankylosaurids and other large carnivores. In terms of their preferred habitat, Carnotaurus prefer large areas of grassland and a small forested area in their enclosure, and eat from both the Carnivore and Live Bait Feeders.

Carnotaurus is known from a single, yet almost nearly complete skeleton and several skin impressions, with only the tail and lower legs missing. However, from this one skeleton, much has been learned from this unique carnivore. Carnotaurus was built for speed, with long, powerful legs and a streamlined body, hence the tiny minuscule arms and wedge-shaped head. The bite of Carnotaurus seems to have been relatively weak, as the lower jaw isn't as powerfully built as other theropods, this suggests that Carnotaurus was more adapted to chasing down smaller prey. Even though a study done by François Therrien in 2005 suggested that the bite of Carnotaurus was stronger than previously thought and not suited to high precision small prey catching. As a consequence, according to this study, Carnotaurus must have primarily preyed upon large animals, possibly by ambush. More recent studies support it having a weaker bite and a more flexible skull, leading some to suggest that it was a pursuit predator that swallowed relatively large prey whole. The skin had a pebbly texture with scutes and osteoderms, bony ridges that usually act as defense mechanisms in reptiles.

The horns of Carnotaurus were too blunt to be used as weapons and were more likely utilized as display features to attract mates or intimidate rivals. Some paleontologists believe that the horns were larger than their bony cores, and that they may have been part of a larger horn-like structure covering the top of the head.

Carnotaurus lived in what is now Argentina in La Colonia Formation. The environment consisted of estuaries, tidal flats or coastal plains with a seasonal both dry and humid climate depending on the period. It lived alongside turtles, crocodiles, plesiosaurs, dinosaurs, lizards, snakes and mammals.

The Carnotaurus was created using the 3D model that was created for 2018's Jurassic World: Fallen Kingdom by Industrial Light & Magic, as well as audio files provided by Universal Pictures to create the most authentic representation of the dinosaur.[7] 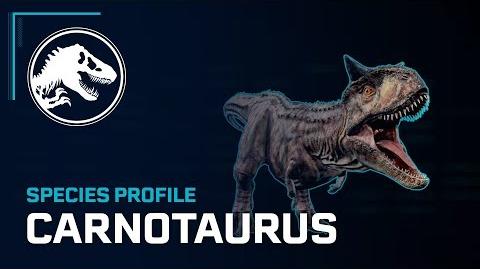