Brachiosaurus is a genus of sauropod dinosaur in the Jurassic World Evolution series, originating from Late Jurassic North America.

In Evolution, the Brachiosaurus is one of the largest species available to the Hammond Foundation for their operations on the Five Deaths, and is first unlocked on Isla Tacaño, ranking among the most popular herbivores with guests.

After Isla Sorna was abandoned in the wake of Hurricane Clarissa, InGen's report on the number of Brachiosaurus on the island had become outdated, as several individuals had changed sex from female to male, and began breeding.[3] Although Brachiosaurus were not known to be exhibited at Jurassic World, a population existed on Isla Nublar and several were encountered during the eruption of Mount Sibo after the abandonment of Jurassic World. After the destruction of Isla Nublar, at least three adult Brachiosaurus were successfully transported back to the mainland.[4] One individual is briefly seen lifting the already destroyed Chrysler Town & Country van, wreaking it more and nearly killing Eli Mills in the process.

Brachiosaurus is a massive sauropod dinosaur, among the largest that existed, distinguished by its long, vertical neck and a comparatively short tail. It has a grey-brown color, like many other dinosaurs, and has a lighter brown underbelly.

Brachiosaurus is comfortable alone or in small groups of up to 5 other individuals. They require a very large enclosure with plenty of trees. They also mix well with almost every other dinosaur type, with the exception of the Indominus rex.

Like other sauropods, Brachiosaurus eat exclusively from Tall Herbivore Feeders, but with the Claire's Sanctuary expansion pack, they can also eat from Tall Paleofeeders, showing a primary preference for Tree ferns and a secondary preference for Conifers and Ginkgo. 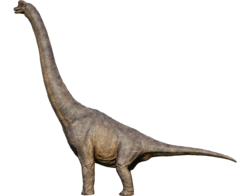 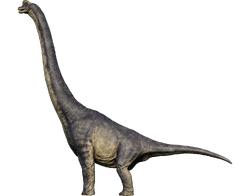 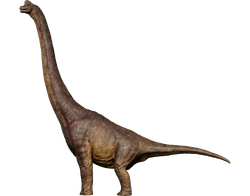 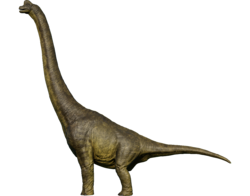 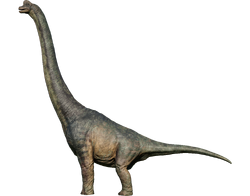 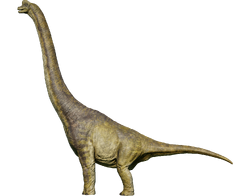 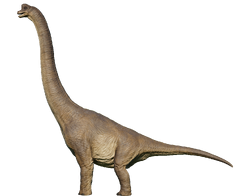 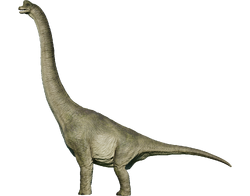 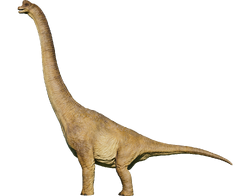 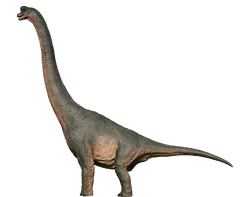 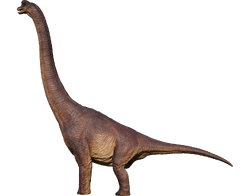 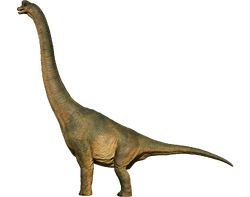 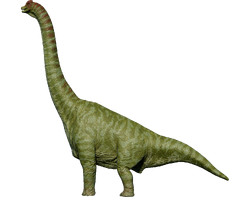 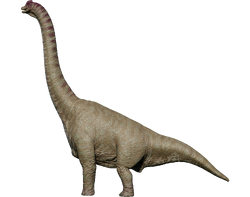 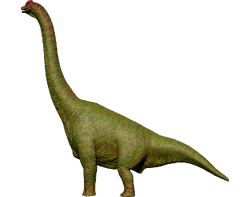 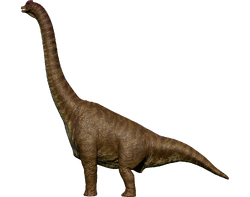 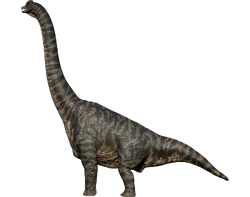 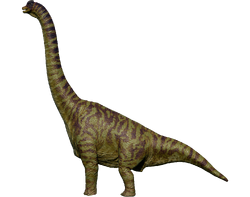 In Evolution 2, Brachiosaurus is a peaceful animal, and can live a solitary existence, as well as a modest group of other Brachiosaurus. They tolerate a large group of other dinosaurs in their enclosure, and while they occasionally square off with one another in territorial contests, they are generally an undemanding species.[5]

Like other sauropods, Brachiosaurus eat directly from trees and plants placed in their exhibit, and show a preference for tall seed plants like cycads. Though their massive size protects them from predators, they are vulnerable to attacks by Tyrannosaurus, and can bleed out and die if not tended to by a medical team.[5]

One of the world's most popular dinosaurs, Brachiosaurus once roamed North America during the Late Jurassic and is one of the rarer sauropods from this area. Brachiosaurus and its family have two notable features that distinguish them from other sauropods; their front legs are proportionally longer than their rear legs and their neck is held upright. This allowed Brachiosaurus to reach high into the tree-tops and avoid competition with ground-dwelling herbivores. A fully grown Brachiosaurus probably didn't have much to fear from carnivores, but juveniles may have fallen prey to Allosaurus and Ceratosaurus.

Fossil evidence of Brachiosaurus has been quite rare, with the most complete skeleton being a sub-adult. Much of the reconstruction has been based on Giraffatitan from the Tendaguru Formation, which at one point was considered an African species of Brachiosaurus. Other members of the brachiosauridae family include several that lived into the Early Cretaceous such as Sonorasaurus and the small Europasaurus, which displayed insular dwarfism. Brachiosaurus is also related to Camarasaurus, which was also found in North America and was a much more common sauropod.

The Brachiosaurus is one of the few sauropod dinosaurs developed for Jurassic World Evolution. The design is based on the creature's first movie appearance in 1993's Jurassic Park. It was first revealed in the announcement trailer that was released at Gamescom 2017.[6] It later received a Species Profile on April 13, 2018.[7]

For the Return to Jurassic Park expansion pack, Brachiosaurus was given a makeover. In addition to twelve new cosmetic skins, the base model was given a new texture map to make it look closer to its depiction in Jurassic Park. A brand new model was also created to go along with the 2001 variant skins that is based on its depiction in Jurassic Park III. With a grand total of eighteen patterns (six patterns for each of its three model variants), Brachiosaurus has the most amount of cosmetic genes of any dinosaur in the game. 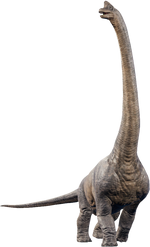 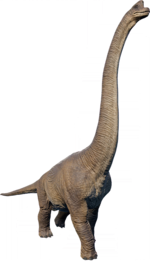 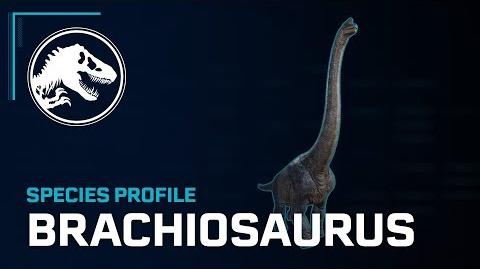 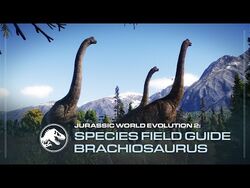 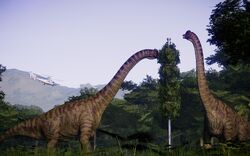