Baryonyx is a genus of spinosaurid dinosaur in the Jurassic World Evolution series. Named for its very large claw on the first finger, Baryonyx originated in Early Cretaceous Europe and was one of the original dinosaurs bred by InGen on Isla Sorna and would later be exhibited as an attraction in Jurassic World on Isla Nublar.

In Evolution, the Baryonyx was added to the game with the Fallen Kingdom Dinosaur Update, and becomes available to the Hammond Foundation's operations in the Muertes Archipelago by achieving a level of reputation with the Security Division on Isla Muerta, and can subsequently be found at the Smokejack Clay Pit and Isle of Wight dig sites.

Originating in the early Cretaceous period, InGen bred a total of five Baryonyx specimens at their Site B facility on Isla Sorna, intending them for display at Jurassic Park on the neighbouring Isla Nublar. While an enclosure was prepared for the Baryonyx, no specimens were present on Isla Nublar during the fateful 1993 incident which resulted in the park's abandonment.[1][2]

During the subsequent abandonment of Isla Sorna during Hurricane Clarissa, InGen released the dinosaurs present on the island to the wild, presumably including the Baryonyx. However, none were encountered during the 1997 or the 2001 incidents on the island.[3][4]

With the introduction of illegally cloned species such as Ceratosaurus and Spinosaurus in 1999, the biosphere of Isla Sorna began to collapse,[2] and while it is not known if any Baryonyx were shipped to Jurassic World on Isla Nublar, by 2015, a population were exhibited in the Cretaceous Cruise on the island, alongside Suchomimus and a selection of herbivorous species.[5] After Jurassic World was destroyed by the rampaging Indominus rex, a group of three Baryonyx were encountered by the survivors of Camp Cretaceous; Jurassic World's resident summer camp.[6]

Three years after the incident, several Baryonyx were encountered by a group sent to the island to rescue the dinosaurs from the impending eruption of Mount Sibo.[7] One individual attacked Claire Dearing and Franklin Webb in an abandoned bunker, and later perished in the lava. Those that were successfully transported to the mainland got auctioned off at the Lockwood Manor, and some were later released into the wild by Maisie Lockwood.[7]

A medium sized carnivore, Baryonyx is distinctly crocodilian in appearance, with the base genome having a dark grey armoured back and a slightly grey underbelly. Like its relatives, Spinosaurus and Suchomimus, they can be distinguished by their elongated snout.

Typical to similarly sized carnivores, Baryonyx are comfortable living alone in an enclosure, but can also live in pairs relatively peacefully, though they will occasionally engage in non-fatal territorial fights, with the highest rated individual emerging as the Alpha. They also tolerate up to sixteen other dinosaurs in their enclosure, though will actively hunt all herbivores with the exception of sauropods but it can still hunt and kill the Nigersaurus.

In addition to eating from Carnivore Feeders and Live Bait, Baryonyx can also eat from Fish Feeders, and require at least 2,868 m² of water to fulfil a wetland need shared by other spinosaurids. Otherwise, they require considerably more grassland in their enclosure and a relatively small amount of forest.

Baryonyx was discovered in 1983 by the British fossil hunter William J. Walker in a clay pit in Surrey. Three years later, a complete skeleton of the dinosaur was found on the Isle of Wight, along with many other remains, thus making Baryonyx one of the best known carnivorous dinosaurs found in Europe. Other fossils unearthed suggests that this dinosaur also lived in Spain. Baryonyx, much like other spinosaurids such as Suchomimus, had narrow jaws with sharp teeth. The stomach contents have yielded fish scales along with Iguanodon contents.

Baryonyx was a large spinosaurid dinosaur. The true adult size of this animal is unknown as the found specimen is a subadult.

Fossil evidence shows both fish scales and juvenile Iguanodon bones in the stomach region, suggesting that Baryonyx was a very capable predator.[8][9][10]

Even more fossil evidence shows direct support for opportunistic feeding behaviour in Baryonyx. The Portuguese or Iberian Baryonyx fossils are found associated with Iguanodon teeth, and paleontologists have listed these associations as generalistic feeding behavior.[9] An almost complete specimen was discovered in 1983 in Surrey, England. Subsequent teeth and bones have been found on the Isle of Wight, and in areas of Spain and Portugal.

Baryonyx lived in fluvial or mudflat environments with shallow water, lagoons, and marshes alongside a rich variety of sauropods, armoured dinosaurs such as Polacanthus, ornithopods such as Hypsilophodon, Iguanodon, Mantellisaurus, and Valdosaurus, as well as theropods such as Eotyrannus and Neovenator.

The Baryonyx was created using the 3D model that was created for 2018's Jurassic World: Fallen Kingdom by Industrial Light & Magic, as well as audio files provided by Universal Pictures to create the most authentic representation of the dinosaur.[11] 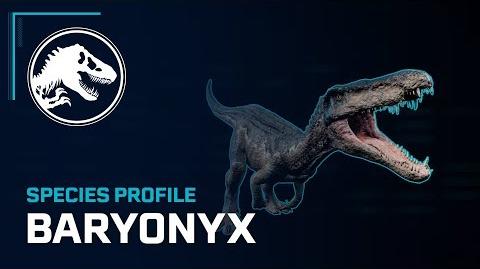