In Evolution, Archaeornithomimus was added to the game with the Deluxe Dinosaur Pack. In Campaign Mode, the species can be unlocked with a high level of reputation with the Security Division on Isla Tacaño, and can subsequently be excavated at the Bissekty and Iren Dabasu Formations.

Although Archaeornithomimus was not known to have been cloned by InGen, in 2015, Claire Dearing, the park manager of Jurassic World, once commented on the dinosaur's lengthy name to justify the naming of the Indominus rex as something that kids should be able to pronounce, much to the amusement of Owen Grady.[1]

Archaeornithomimus is an ornithomimid dinosaur related, and similar, to Gallimimus and Struthiomimus. Archaeornithomimus has a shorter snout and tail than the other members of its group. The base genome is mainly a light beige at the bottom with black hands and legs. It has a greyish beige coloration, with streak of black at the middle of the body, from the eye orbit to the tail, an orange streak on top of the black streak, and a yellow streak on the back.

Similar to others of its family, Archaeornithomimus is happy either alone or in herds. It tolerates other herbivores but will become stressed when the exhibit is overcrowded. It is rather defenceless against most carnivores, and rely on speed to escape their predator. 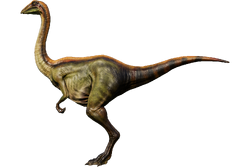 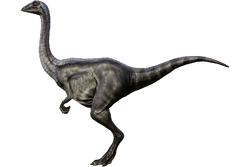 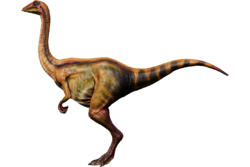 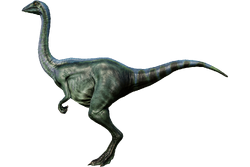 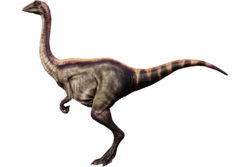 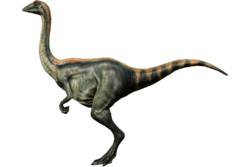 Archaeornithomimus remains have been found in Uzbekistan and Mongolia. At the time of its discovery, 1972, it was the oldest known of the ornithomimidae family from the late Cretaceous around 70 million years ago, but newer discoveries have since pushed the family back much earlier to the Cretaceous. Interestingly, Archaeornithomimus was once regarded as a species of Asian Ornithomimus, though the genus being more commonly found in North America.

Archaeornithomimus shares many traits seen in others of its family such as Gallimimus, with long legs for fast running and a long stiff tail to act as a counterbalance. The skull hasn't been found yet, but it presumably was toothless like other ornithomimoids.

In the Bissekty Formation of Uzbekistan, Archaeornithomimus lived alongside the small ceratopsian Turanoceratops and the hadrosaur Gilmoreosaurus, as well as a few other more obscure dinosaurs with little fossil material. Archaeornithomimus are also believed to have possessed feathers.