In Evolution, Apatosaurus is first unlocked in the Campaign Mode through expeditions first available on Isla Sorna and can subsequently be excavated in the Dinosaur National Monument and Morrison Formation dig sites.

Apatosaurus was originally planned to be exhibited as an attraction for the original Jurassic Park on Isla Nublar, with 57% of the genome completed by InGen by 1993.[1] However, after the disastrous San Diego Incident, InGen was acquired by Masrani Global, which began development of Jurassic World on Nublar. Apatosaurus was eventually cloned and exhibited on the island, where it lived alongside numerous other species of herbivore such as Triceratops, Stegosaurus, and Parasaurolophus.[2]

In 2015, several Apatosaurus were brutally killed by the rampaging Indominus rex, though surviving members of the population were later encountered on Nublar three years later, during the volcanic eruption of Mount Sibo. At least four Apatosaurus were successfully transported to the mainland. These specimens were later released from their cages alongside numerous other species of dinosaurs, into the wilds of northern California.[2][3]

Apatosaurus is a large sauropod which originated in North America during the late Jurassic period. Reaching up to twenty-seven meters in length, Apatosaurus is a gentle giant, with grey-blue leathery skin and a small head in comparison to its body.

Apatosaurus is one of the more difficult sauropods to keep due to its higher social need, slow growth time, high chance of failure and high price. It is therefore recommended to have more than one fully updated Hammond Creation Lab to incubate them, especially with extensive genetic upgrades. Apatosaurus themselves mix well with almost any dinosaur, except for the Indominus rex.

Like other sauropods, Apatosaurus eat exclusively from Tall Herbivore Feeders, but with the Claire's Sanctuary expansion pack, they can also eat from Tall Paleofeeders, showing a primary preference for Ginkgo and a secondary preference for Conifers and Tree Ferns.

Apatosaurus is one of the most well known and popular sauropods along with Diplodocus, Brachiosaurus, and Camarasaurus. Compared to its closest relatives in the Morrison Formation, Diplodocus and Barosaurus, Apatosaurus was stockier and shorter overall.[4] The long tail ended with a whip-like tip which could have been used for visual communication with other Apatosaurus and as a weapon against predators.[5] The long neck of Apatosaurus and other sauropods allowed them to feed from trees or on ground level. Apatosaurus and it’s closest relatives had thicker, more muscular necks than other sauropods, and they may have used them as bludgeoning weapons in intraspecific combat, like modern giraffes.[6]

Biomechanical studies suggest that Apatosaurus could crack its tail like a whip, producing a sonic boom in excess of 200 decibels, which would have been loud enough to kill a human from the shockwave alone.[5][7] This makes the tail a perfect weapon against predators like Allosaurus and Ceratosaurus and to be used as a counterbalance when Apatosaurus can rear up on its hind legs when reaching high up to the treetops.

Apatosaurus was one of the most common dinosaurs in the Morrison Formation ecosystem, which had a semiarid environment with distinct wet and dry seasons. It inhabited a variety of gigantic sauropods such as Brontosaurus, Brachiosaurus, Camarasaurus, and Diplodocus. Other dinosaurs the Apatosaurus lived alongside were theropods Allosaurus, Ceratosaurus, Torvosaurus, and herbivores such as Dryosaurus, and Stegosaurus.

The Apatosaurus is one of the few sauropod dinosaurs developed for Jurassic World Evolution. The design is based on the creature's first movie appearance in 2015's Jurassic World. It was first revealed in the announcement trailer that was released at Gamescom 2017.[8] It later received a Species Profile on April 13, 2018.[9] 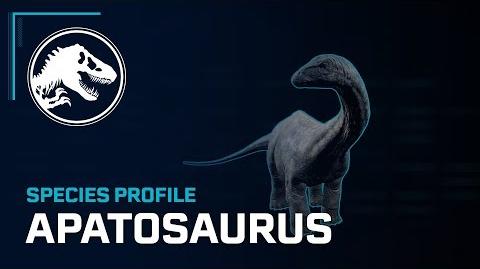 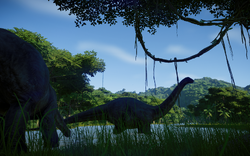 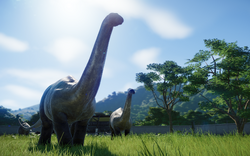