Ankylosaurus is a genus of ankylosaurid dinosaur in the Jurassic World Evolution series, originating in Late Cretaceous North America.

In Evolution, Ankylosaurus is first unlocked by the Hammond Foundation through expeditions available on Isla Muerta. In the Secrets of Dr. Wu expansion pack, players can fuse the Ankylosaurus with Diplodocus to create the Ankylodocus hybrid.

Ankylosaurus was one of the dinosaurs planned for the original Jurassic Park after its initial opening, with InGen having acquired 91% of the Ankylosaurus genome by 1993.[1] In 1999, after Masrani Global acquired InGen in the wake of the disastrous San Diego Incident, InGen scientists illegally conducted cloning experiments on Isla Sorna, where they bred Ankylosaurus as well as Spinosaurus, Corythosaurus, and Ceratosaurus.[1] These Ankylosaurus were later released into the wild and were briefly encountered by the survivors of a plane crash on the island in 2001.[2]

Ankylosaurus were later exhibited as an attraction for Jurassic World on Isla Nublar, which opened in 2005, which were notably different in appearance to the original animals cloned on Isla Sorna. In 2015, a group of Ankylosaurus were attacked by the rampaging Indominus rex which managed to kill one after isolating it from its herd.[3] Three years later, Ankylosaurus was one of the eleven species which were planned to be extracted from Isla Nublar in the event of Mount Sibo's volcanic eruption. At least five Ankylosaurus were successfully transported to the mainland. One was successfully auctioned off to an Indonesian gentleman, while the others were released into the wilds of northern California along with all the other captured dinosaurs.[4]

The Ankylosaurus is the largest species of ankylosaurid dinosaur, which originated in North America during the Late Cretaceous period. The base genome of the Ankylosaurus bred by InGen for Jurassic World are a dull greyish-brown color.

Ankylosaurus is one of the most well-defended herbivores thanks to its thick armor and powerful bone-breaking club tail. This is in contrast with its short lifespan and low immunity to diseases. Its moderate cost and space requirements offset this, making it is less expensive to modify its genes to increase its immunity and lifespan.

Preferring to be enclosed with smaller numbers of dinosaurs, the Ankylosaurus is one of the least social herbivores in the game, as it tolerates no more than four individuals of its species. While it can be kept with small carnivores such as Velociraptor and Dilophosaurus, it will fight with large carnivores or other herbivores if the enclosure gets overcrowded.

The largest armored dinosaur, and namesake of said group, Ankylosaurus was discovered by Barnum Brown between 1906 and 1908, in the Hell Creek Formation in Montana. Even though a complete skeleton has never been discovered, paleontologists have a very good idea of how this dinosaur looked, by studying its very close relative and predecessor Euoplocephalus.[5]

Recognizable by the large club at the end of its tail, Ankylosaurus is usually seen as the archetypical ankylosaur, but it had plenty of features unique to itself: It was a massive animal, far larger than any nodosaurid and even the average ankylosaurid. Its armor, like that of other ankylosaurids, was plate-like and lightweight, rather than the spiky, heavyweight defenses nodosaurids displayed. Its massive tail club was similar to that of Euoplocephalus, yet with slightly different proportions.[6][5]

Ankylosaurids, in general, had wide snouts that point to an unselective diet, and Ankylosaurus is no exception. Also, its nose was larger than expected and almost moose-like, a possible indicator of a well-developed sense of smell. Behind its eyes, Ankylosaurus had two pairs of horns, more well-defined than any of its close relatives.[6]

Ankylosaurus lived 68 to 66 million years ago, in the Hell Creek, a floodplain ecosystem with warm subtropical climate.[6] Other dinosaurs known from that time and place are the tyrannosaurid Tyrannosaurus, the ceratopsids Triceratops and Torosaurus, the pachycephalosaurids Pachycephalosaurus, Stygimoloch, and Dracorex, the hadrosaurid Edmontosaurus, and a fellow ankylosaur, the nodosaurid Denversaurus.[7] Those were among the last non-avian dinosaurs to have ever lived.

The Ankylosaurus was developed using the 3D model that was made for the Jurassic World films by Industrial Light & Magic, to create the most authentic depiction of the dinosaur possible.[8] Its inclusion in the game was first revealed in the in-game footage that was revealed at Frontier Expo.[9][10] It received a Species Profile on February 2, 2018.[11] An exclusive Vivid skin was given to the players who spent at least $35 during the Yogscast Jingle Jam 2018 on Humble Bundle.

For the Return to Jurassic Park expansion pack, Ankylosaurus was given a makeover with six additional cosmetic skins and a new model that is based on its depiction in Jurassic Park III. 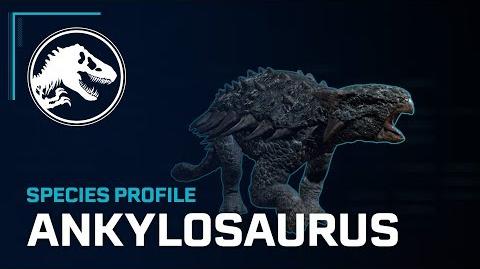 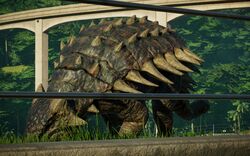