Amargasaurus is a genus of sauropod dinosaur in Evolution 2, originating in Early Cretaceous South America.

Amargasaurus is a relatively small sauropod, measuring between nine and ten metres in length, and weighing about 2.6 metric tons.[1] The most distinctive feature of Amargasaurus are the large neural spines running along its neck and upper back, which form a double row. The base genome has dark orange scales, with a creamy-coloured underbelly and a slightly grey snout.[1]

Amargasaurus are a peaceful species, and can easily coexist with other species of herbivores, being comfortable in small groups, or as solitary individuals. Like other sauropods, Amargasaurus eat leaves, though due to their smaller size, are unable to feed on tall trees.[1]

Amargasaurus was first discovered in 1984 in Argentina, in La Amarga formation, by the same expedition which also uncovered the single but extremely well-preserved Carnotaurus specimen.[1] Living about 125 million years ago (and thus being far older than Carnotaurus), this is one of the few Cretaceous sauropods known from a complete skeleton. It is also one of the smaller sauropods, as, despite reaching up to 10 meters in length, most of that was neck and tail, and the animal wouldn't be much heavier than a modern rhino. The distinctive row of spines along its neck has been the subject of considerable debate among palaeontologists, with some theorizing that it was used for thermoregulation, while others believe they protected the animal from predators.

Amargasaurus was a member of the Dicraeosauridae family, related to Rebbachisaurids such as Nigersaurus and diplodocids such as Diplodocus and Apatosaurus. While not closely related to the giant titanosaurs such as Dreadnoughtus, Amargasaurus was a close relative of Maraapuniasaurus, one of the largest dinosaurs from the Jurassic, known from a giant vertebra long lost to the elements.

Amargasaurus was found in the Early Cretaceous Argentinian La Amarga formation, which used to be a floodplain and lake ecosystem. Most other animals from that formation are known from indeterminate remains, and the jaws are one of the few missing elements of Amargasaurus' skeleton, so a clear picture of its living conditions is still out of science's grasp.

Amargasaurus was among the first dinosaurs confirmed to be in Evolution 2, appearing in the game's announcement trailer on June 11th, 2021. It later received a Species Field Guide on June 25th, 2021, as well as a short article exploring the species on the official Frontier forums.[1] 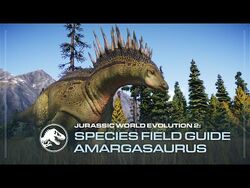