Allosaurus is a genus of theropod dinosaur in the Jurassic World Evolution series. One of the most famous theropods, Allosaurus originated from Late Jurassic North America.

Allosaurus was added to Evolution with the release of the Fallen Kingdom Dinosaur Update. The species becomes available to Jurassic World operations by progressing through the Science Division on Isla Sorna, and can subsequently be researched and found in the Morrison Formation and the Cleveland Lloyd Dinosaur Quarry dig sites.

Allosaurus was originally intended to be displayed as an attraction in Jurassic Park on Isla Nublar. However, they hadn't been cloned at the time of the 1993 incident, with a 1996 asset catalogue of the dinosaurs present on Nublar and InGen's Site B facility on Isla Sorna, reported that a mere twelve percent of the Allosaurus genome had been completed.[1]

Subsequently, however, Allosaurus specimens were bred for Jurassic World on Isla Nublar, after it opened to the public in 2004. Given the presence of juvenile Allosaurus on the island in 2018, it is likely that a breeding population existed on Isla Nublar.[2] During the eruption of Mount Sibo in 2018, one juvenile Allosaurus was encountered during a stampede of dinosaurs. Several Allosaurus were transported off the island to the mansion home of Benjamin Lockwood in California. At least one was successfully sold at the Lockwood Manor auction, while the others were released into the wilds of northern California alongside numerous other species of dinosaur by Maisie Lockwood.[2]

A year after the events at Lockwood Manor, a fully mature Allosaurus was encountered in Big Rock National Park, where it was witnessed unsuccessfully hunting a family of Nasutoceratops. Subsequently, the predator turned its focus to a family of campers in a trailer, causing severe damage before being frightened away by a crossbow bolt fired by the camper's daughter Kadasha.[3]

A ferocious apex predator and one of the world's best-known dinosaurs, Allosaurus is one of the largest carnivores for Jurassic World operations on Isla Nublar and the Muertes Archipelago. The base genome of the Allosaurus is a blueish-grey body, a cream underbelly, light grey stripes covering its entire back, and a pair of red brow crests above its eyes.[2]

Allosaurus is a large, solitary theropod that doesn't tolerate other large carnivores in their enclosure, even other Allosaurs, which can result in potentially fatal clashes. However, they can tolerate a decent number of other species in their enclosure, including small carnivores and herbivores. Allosaurus prefer large areas of open grassland to hunt in and prefer comparatively smaller areas of forest. The comfort threshold of the Allosaurus is high, comparable to Giganotosaurus, requiring powerful fences to be contained.

Allosaurus was one of the largest and most prolific predators of the Late Jurassic, found in North America and Portugal. The first Allosaurus fossils were found in 1877 by Othniel Marsh, during the 'Bone Wars' between Marsh and Edward Drinker Cope. Allosaurus was widespread throughout North America, yet despite its success, its branch from the Allosauridae seems to haven't evolved any further beyond the Late Jurassic. However, relatives such as Acrocanthosaurus, Carcharodontosaurus and Giganotosaurus continued to thrive into the Cretaceous.

The bite of Allosaurus wasn't very strong and instead, it is theorized to have used its upper jaw like a hatchet to exsanguinate its prey, although the possibility of this hunting technique is still debated. It is also believed that Allosaurus also used its muscular, clawed arms to grapple onto its prey. It is often inferred to have been a pack hunter due to the large size of its prey and the existence of a number of "lair" sites with remains from several individuals found close together, earning it the popular moniker of "the lion of the Jurassic". However, other evidence also shows these animals were frequently aggressive to one another and even scavenged carcasses of their own species. [4]

Allosaurus lived in semiarid environments with distinct wet and dry seasons, and flat floodplains alongside dozens of other species of dinosaur, including the sauropods Diplodocus, Apatosaurus, Brachiosaurus and Camarasaurus, other herbivores such as Dryosaurus, Nanosaurus, Camptosaurus, and Stegosaurus, as well as carnivores such as Ceratosaurus, Ornitholestes, and Torvosaurus.

Allosaurus first appeared in 2018's Jurassic World: Fallen Kingdom in juvenile form. Instead of directly using the movie asset like they did with the rest of the Fallen Kingdom dinosaurs, the development team built a completely new model depicting a fully grown Allosaurus, loosely based on the juvenile from the film. Audio files provided by Universal Pictures, however, were still used.

In 2019, the film canon design of an adult Allosaurus appears for the first time in Battle at Big Rock, which bears minimal resemblance to Evolution's Allosaurus. Despite there being an update dedicated to the short film, the Allosaurus in-game wasn't updated to be film accurate. 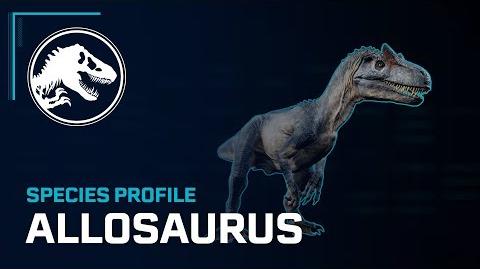 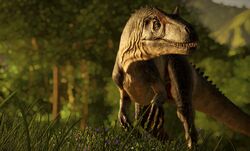